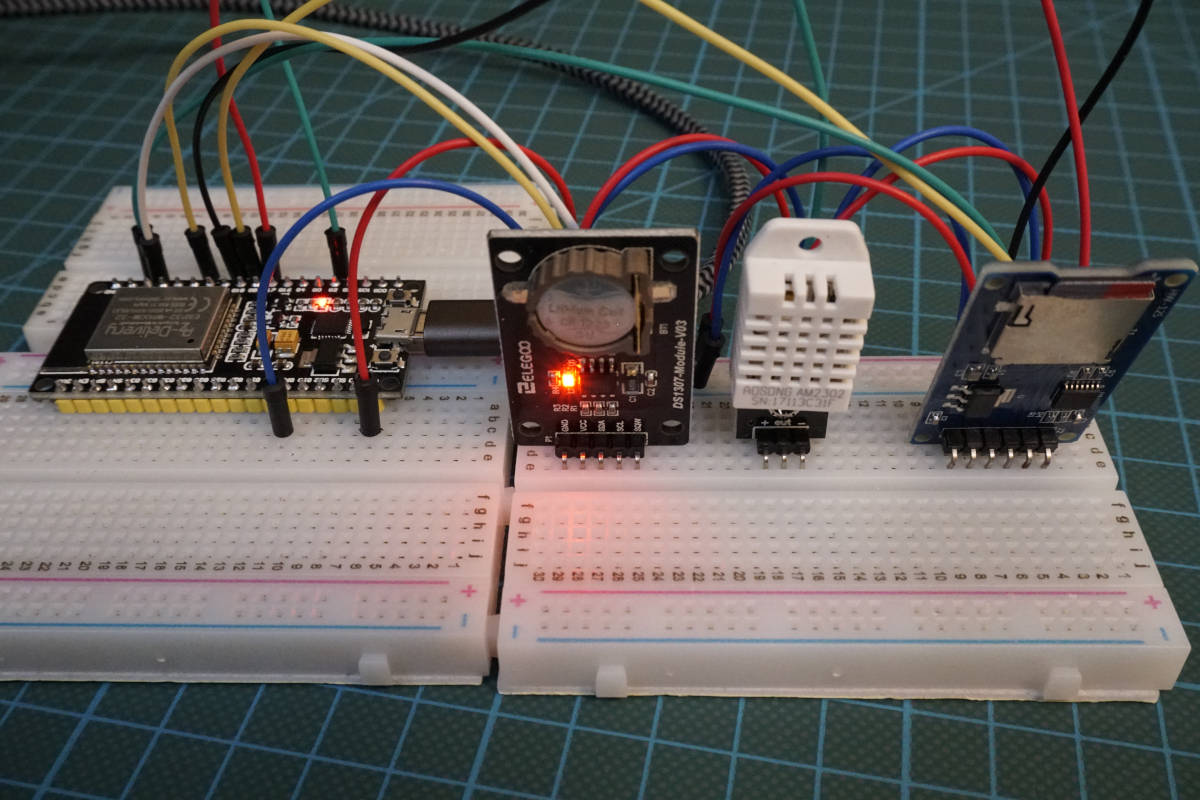 In this tutorial you learn how to use the SD card module in combination with your Arduino, ESP8266 and ESP32 microcontroller board.

We create a temperature logger where we store the time from a real-time clock module, the temperature and humidity to a micro SD card.

In my projects I like to transfer data wireless via MQTT to a central database, that is normally on a Raspberry Pi. But what if there is no WiFi available like in the garden? In this case we have to save the data to the SD card, because the internal memory of the microcontroller is only some megabyte. Moreover the internal memory of the microcontroller is harder to access and can be lost during a power reset. 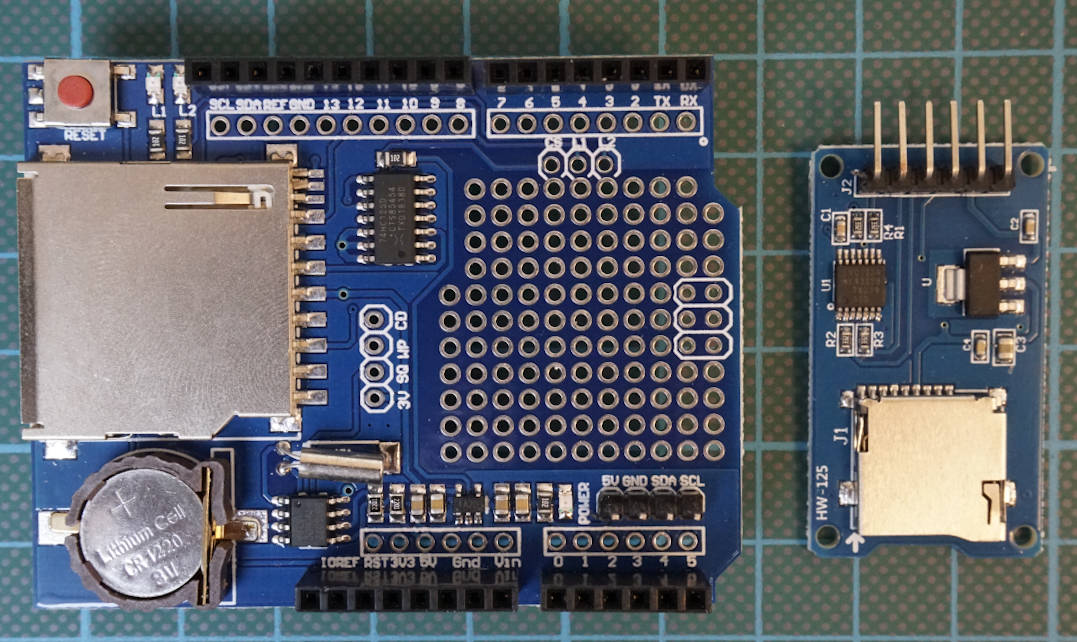 If we take a look at the SD card module, we see that there are two electrical components on the board.

More components are not needed because the SD card itself has a build in SPI interface. Therefore the SD card module does not have to supply this interface.

The following sub-chapter show how to wire the module to different Arduino, ESP8266 and ESP32 microcontroller boards. If your favorite board is missing, use the comment section below and I will add your board to this article.

The Arduino Nano, Pro Mini and Uno share the same pins for the SPI connection. But for the Arduino Mega we use the standard SPI pins that are named like the description of the SD card module.

The following pictures show the wiring between the SD card module and different Arduino boards.

The following table shows the wiring between the different ESP8266 boards and the SD card module.

Because the SPI interface with ID 0 is used for the communication of the flash chip, when you upload a program from your PC to the connected ESP8266 board via USB, I always use the HSPI interface.

The following pictures show the wiring like presented in the previous table. From the picture of the ESP8266 NodeMCU, you see that I do not use the SPI interface 0 on the right side of the board labeled SK, SD, SC, S1.

The ESP32 microcontroller and the SD card module have the same operation voltage of 3.3V. If you power the ESP32 board via Micro-USB you can also use the v5 pin that provides a power supply of 5V for the SD card. The internal voltage regulator and logic-level shifter reduce the supply voltage down to 3.3V and also translate the SPI communication to the desired voltage level.

The following table shows the connection between the SD card module and the ESP microcontroller.

From the table, you see that we can use the VSPI connection pins or the HSPI interface out of the 4 SPI interfaces that the ESP32 provides. The following fritzing picture shows the connection between the SD card module and the ESP32 microcontroller board using the VSPI interface.

Arduino and ESP8266 Temperature Logger with RTC and SD Card

In the following example we want to build a temperature logger that reads the temperature and humidity from an DHT22 sensor and gets the current time from a real-time clock (RTC) module. The whole dataset is then written to a micro SD card.

The following picture shows the wiring for Arduino and ESP8266 microcontroller. You can klick on each image to enlarge it.

For this project we need quite some libraries. The only library, that is not installed by default, is the RTClib library that we need to get the time from the RTC. The library can be installed via the Arduino IDE and if you do not know how to install a library, you can visit my library installation guide.

The following lines show the program code for Arduino and ESP8266 based microcontroller.

At the beginning of the script we include the following libraries:

Because I use the DHT22 temperature and humidity sensor, I have to define the DHT type as DHT22. If you use the DHT11, you only have to change the type in this line to DHT11.

Before we enter the setup function we create an DHT object with the previous defined DHT pin and type. Also we create an object for the RTC.

In the setup function we set the baud rate to 9600 that have to match the baud rate of the serial monitor. Now we wait until the serial communication channel is established. With the following three if statements we initialize the real-time clock and the SD card module. The real-time clock is set to the date and time when the sketch is compiled. If something failed during the initialization, we get an error message in the serial monitor.

In the last line of the setup function we initialize the DHT object.

After the setup function the RTC, the DHT sensor and the SD card module are ready to operate. The loop function start with the creation of an empty string.

Now the humidity and temperature is read from the DHT sensor and also the current time in unix datetime format from the RTC. After we have all values that we want to save to the SD card we create one string that will be one line in the text file that we create on the SD card. Therefore we connect all measurements and separate them with a comma.

The next step is to write the complete string to the SD card. Therefore we open the text file with the open function of the SD library and set the path to the text file and use the argument FILE_WRITE to open the file with writing permission.

If we can not open the file, we write an error message and at the end of the script we wait for 2 seconds.

The following two pictures show the serial monitor and also the opened text file on the PC. 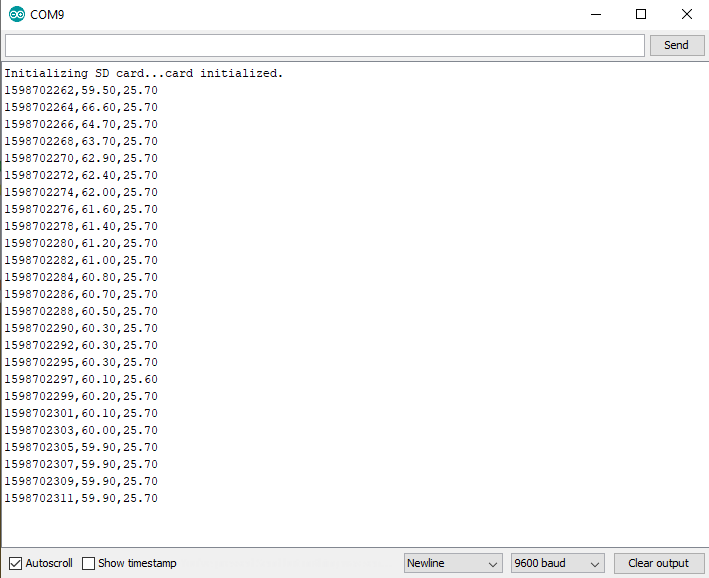 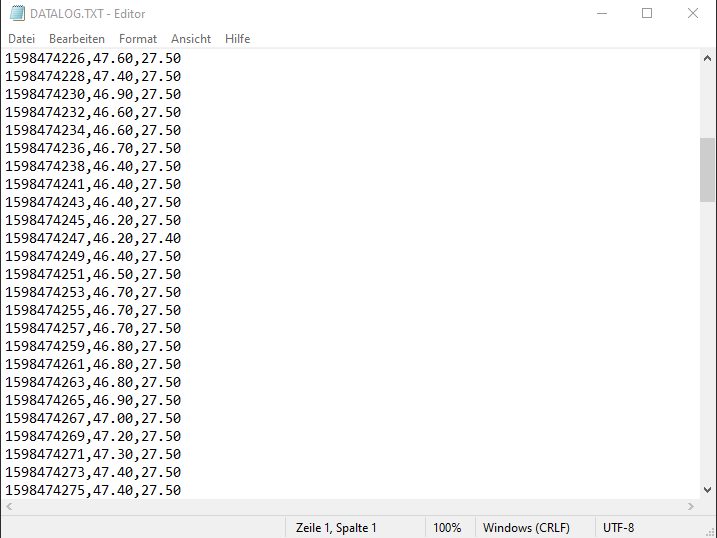 For the ESP32 we want to create the same temperature logger that reads the temperature and humidity from an DHT22 sensor and gets the current time from a real-time-clock (RTC) module, like for the Arduino and ESP8266. But because the program script is different, I create a separate section in this tutorial. 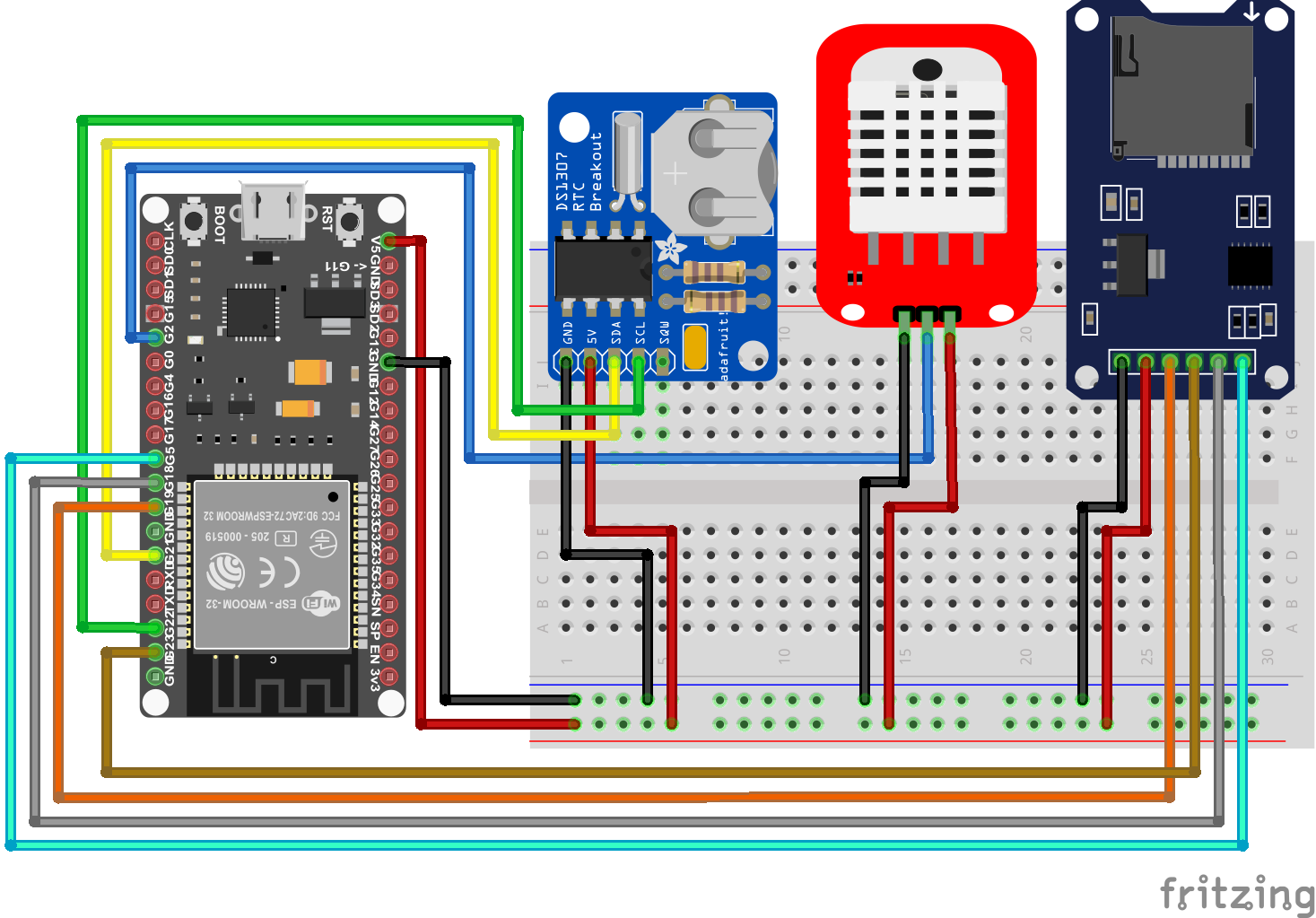 For the program script we can use most of the parts in the previous example but we will use two functions to write on the SD card. The following lines show the Arduino script for the ESP32 temperature logger.

Because most of the script is already described in the Arduino and ESP8266 example, I want to focus on the differences.

The first difference is that we not only need the SD card library but also need the FS (file system) library. Also the DHT22 sensor is connected to digital pin 2.

In the setup function we use the writeFile function that is only executed once and that has three arguments:

Like in the previous example we first open the text file or if it does not exist, we create the file. Then we write the string that was defined by the function argument to the file but at the end we add “\r\n” for a carriage return and start in a new line for the next message payload. When the string was written successfully to the file, we close the text file.

In the loop function we use the appendFile function that is the same as the writeFile function but now the string in the argument is the timestamp from the RTC, the humidity and the temperature.

The following picture shows the output of the serial monitor and the text file on the PC. 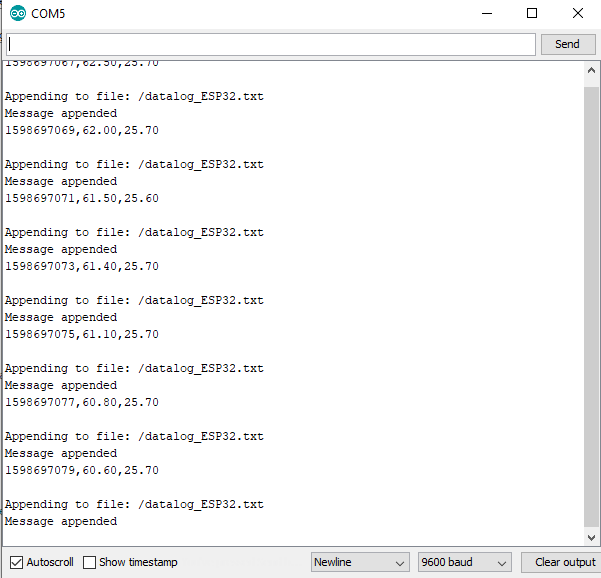 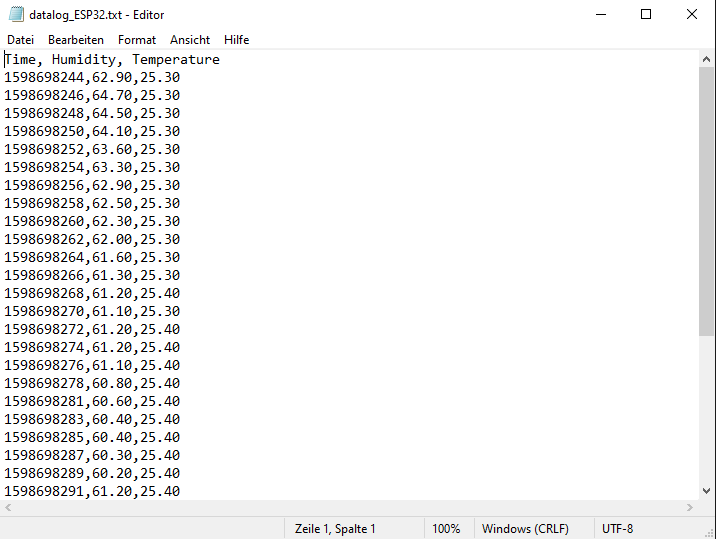 In our next example we want to read the data that we wrote on the SD card in the previous example. You can take the wiring from the third chapter of this tutorial.

Program Code for Arduino and ESP8266

You know most of the program code from the example with the temperature logger. The only difference is that we open the file in the setup function without the FILE_WRITE argument. Therefore the Arduino, ESP8266 or ESP32 has only the permission to read the file.

In the following while loop, the program loops over every row of the text file and writes the line on the serial output so that we see the complete text file in the serial monitor of the Arduino IDE. If the last line is printed to the serial, the file is closed.

For the ESP32 we use again a function from the examples that opens the text file and uses the same while function to loop over every line of the text file.

I hope you learned a lot in this tutorial. If you have any questions regarding the SD card module, please use the comment section below to ask your questions. If will answer them as soon as possible.