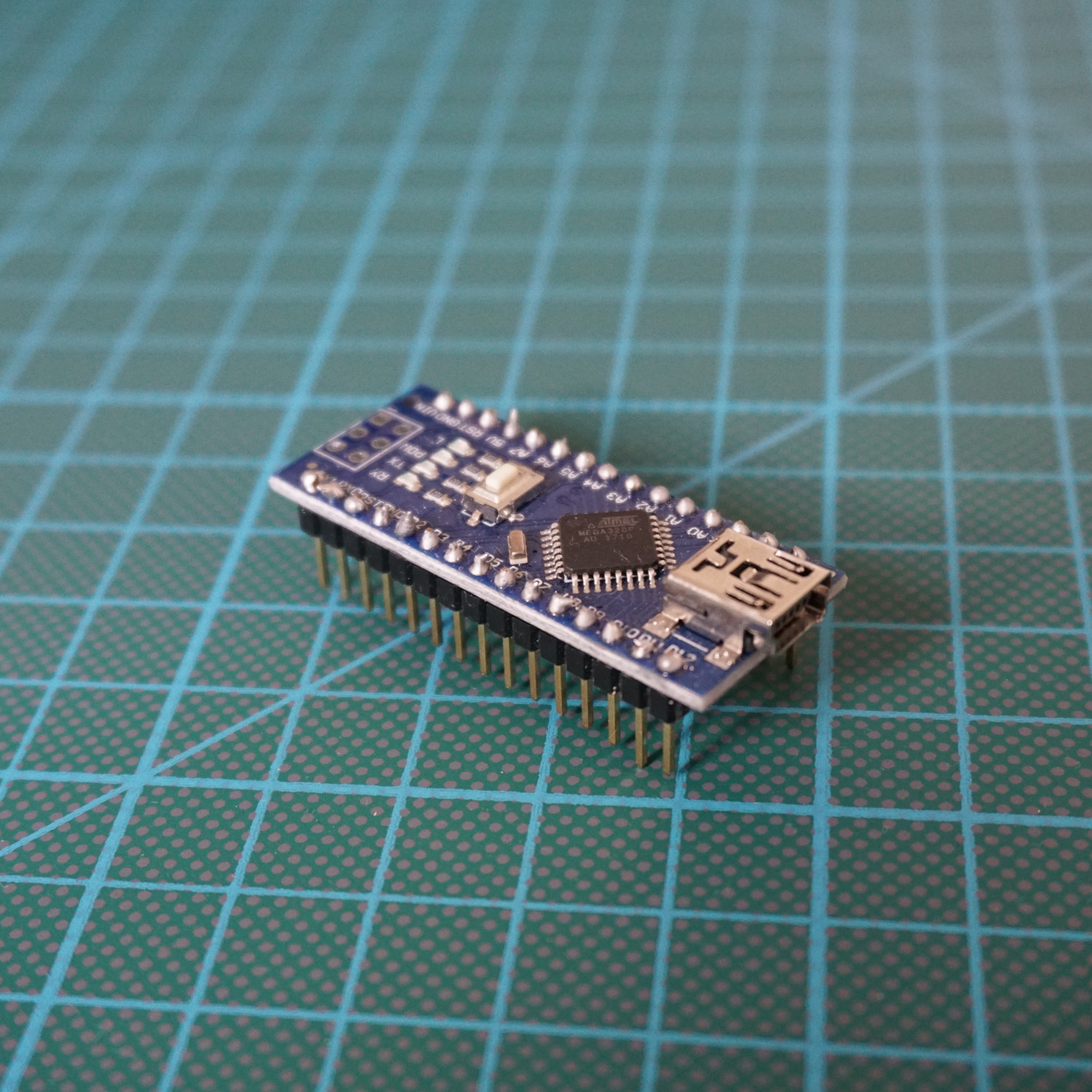 In this tutorial you learn everything you have to know about the Arduino Nano: 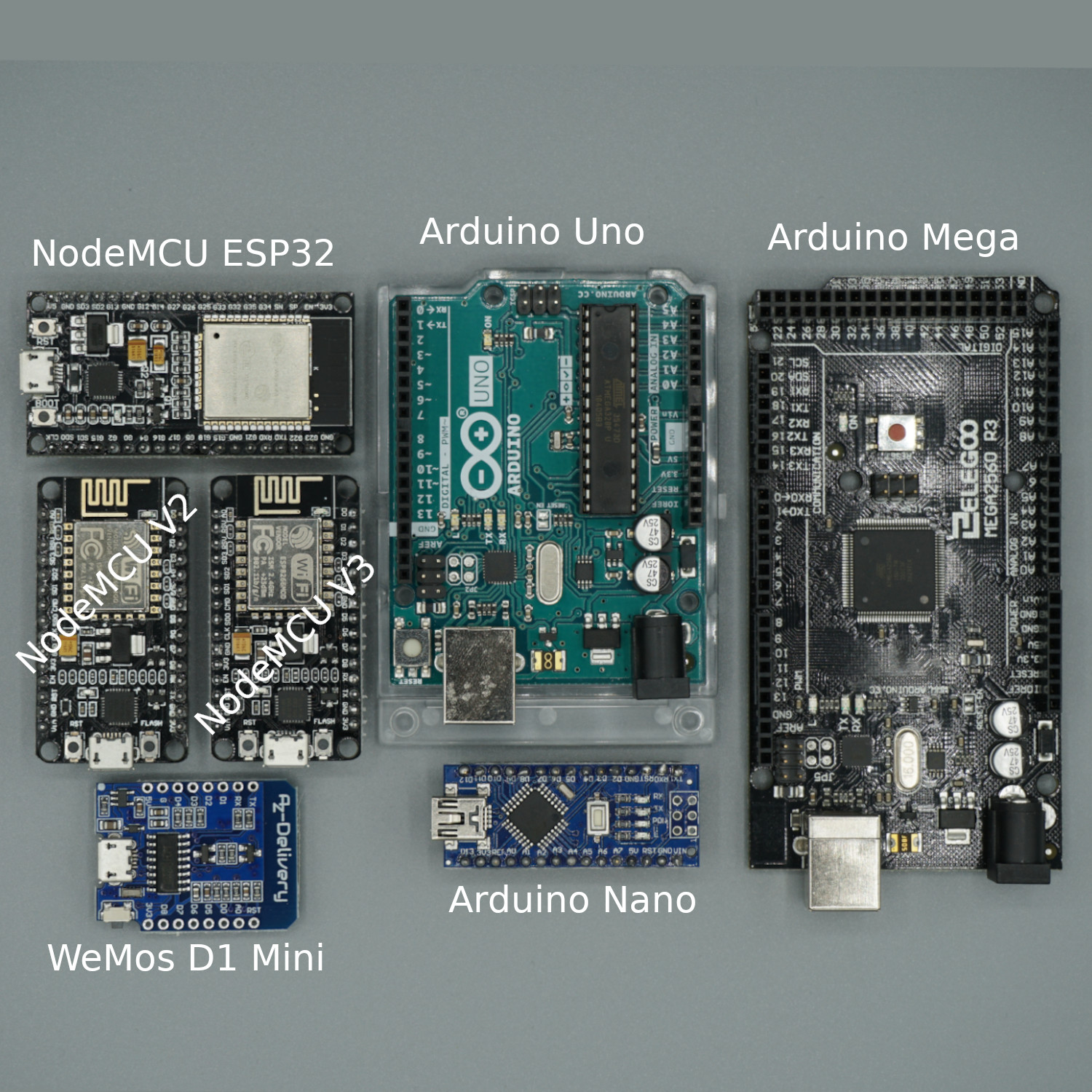 The Arduino Nano is a microcontroller board, based on the ATmega328P microcontroller by Atmel. The Atmega328 comes with built-in bootloader, which makes it very easy to flash the board with your code. Like all Arduino boards, you can program the software running on the board using a language derived from C and C++. The easiest development environment is the Arduino IDE. The Nano is the smallest board of the Arduino boards but has nearly the same datasheet like the Arduino Uno. Only the power jack is missing and instead of a standard USB port the Nano has a Mini-B USB plug.

The following table contains the datasheet of the Arduino Nano R3 microcontroller board:

Do you want to compare the datasheet of different microcontroller boards like Arduino Uno, Arduino Mega, ESP8266 Node MCU and WeMos D1 Mini? Follow this Link for the comparison.

If you do not already have an Arduino Nano, you can buy one from the following links. I get commissions for purchases made through links in this table. 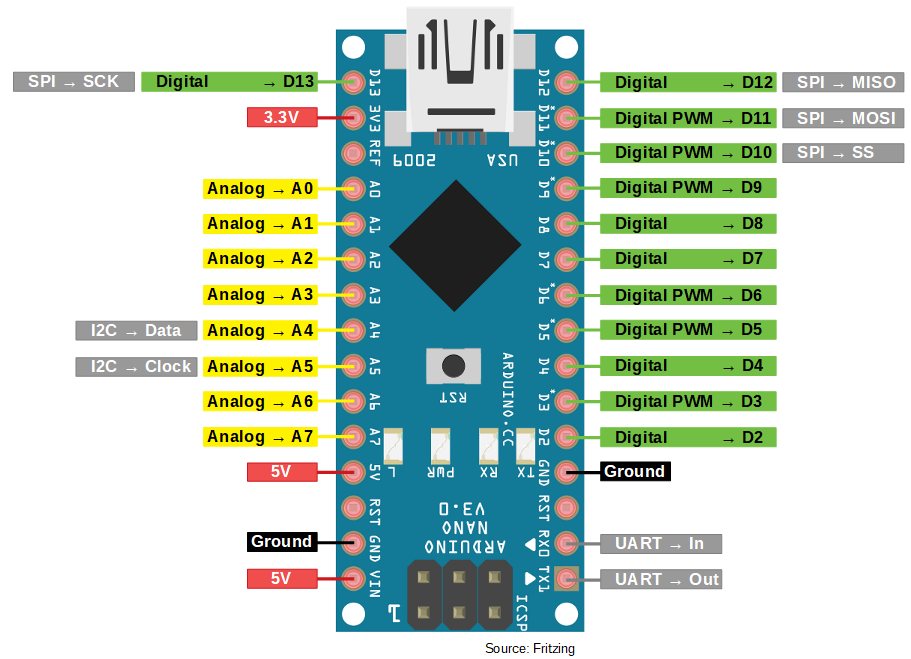 The Arduino Nano is the smallest microcontroller in the Arduino family and has therefore the lowest number of pins and connections. But in my opinion the Nano is very suitable for projects where you do not need a wireless connection.

The Nano has one 3.3V and two 5V power pins of which one is the VIN pin. With the VIN pin you can supply the Arduino Nano with a voltage between 7V-12V to run the microcontroller on battery for example. All three power pins provide a maximum currency of 50 mA. You can close the circuit with two ground pins.

The microcontroller has 8 analog pins with a 10-bit analog-to-digital converter (ADC). The ADC converts the input voltage to a signal between 0 and 1023. There is also the possibility to use the analog pins A0…A5 as output with the function digitalWrite(Ax). Both analog pins A6 and A7 are only analog inputs.

There are in total 14 digital I/O pins which can be used with a maximum currency of 40 mA if you are not using the serial ports RX0 (UART -> In) and RX1 (UART -> Out) and do not use the Serial.begin() function in your Arduino script. If you use the serial ports, then you have in total 12 digital pins (D2…D13) that can be used like you see in the pinout picture. If you want to create a PWM signal for example to control the speed of a motor, there are 6 of the 13 digital pins, which are PWM ready.

You can use pin 2 and 3 as interrupts if you want to monitor an input during the runtime of the whole Arduino script.

The typical communication standards (SPI, I2C and UART) are also available on the Arduino Nano.

The main microprocessor for the Arduino Nano 3 is the ATmega328p.

The following table shows the voltage specifications of the two onboard voltage regulators.

The FT232R USB UART is connected to the USB port of the Arduino Nano that supports the board with 5V and a maximum current of 500mA but it is recommended to only draw a current of 100mA if the microcontroller is powered via USB. The 3.3V pin is also powered from the FT232R voltage regulator that supports up to 50mA.

The second voltage regulator, the LM1117 supports input voltages between 7V and 12V with a maximum current of 900mA. In the data sheet you find a maximum voltage of 20V but this voltage is not recommended for a longer duration because the voltage regulator has no head sink.

Each I/O pin supports a maximum current of 40mA but it is not possible to draw 40mA current over each pin because the maximum allowed current load of the port registers must be considered.

The digital and analog pins of the ATmega328p are connected to different port registers and each port register supports a maximum allowed current that depends on if the register is used as source or as sink. The following table shows which pin is assigned to which port register and also the maximum current.

The maximum current, if the pins are a current source, is 150mA. The sum of all pins in the colored port register should not exceed 150mA:

If the I/O pin is a current sink, the maximum current is 100mA and divided into three groups:

How to Power Arduino Nano: 2 Possibilities

You can power your Nano in two save options because a voltage regulator provides a regulated and stable voltage for the microprocessor:

You can also power power the Arduino microcontroller from the 3.3V pin or the 5V pin. This is not recommended because you bypass the voltage regulators and have to make sure that the voltage level is stable.

The following picture show the power consumption of the Arduino Nano in different setups.

The following example scripts sets Arduino Nano in the deep-sleep mode for 8 seconds with the use of the low power library. I also wrote a step by step tutorial, how to reduce the Arduino power consumption where you also see how to reduce the clock speed.

You find a full comparison about the power consumption in different power modes of several Arduino, ESP8266 and ESP32 microcontroller boards in my Microcontroller Datasheet eBook.

The Nano is the smallest Arduino board on the market. If you do not need a WiFi connection the Arduino Nano is a good choice. If you want a small board in combination with a mini USB cable power supply and you do not need multiple analog pins than the WeMos D1 Mini with the ESP8266 chip will be a good alternative because this board has WiFi included.