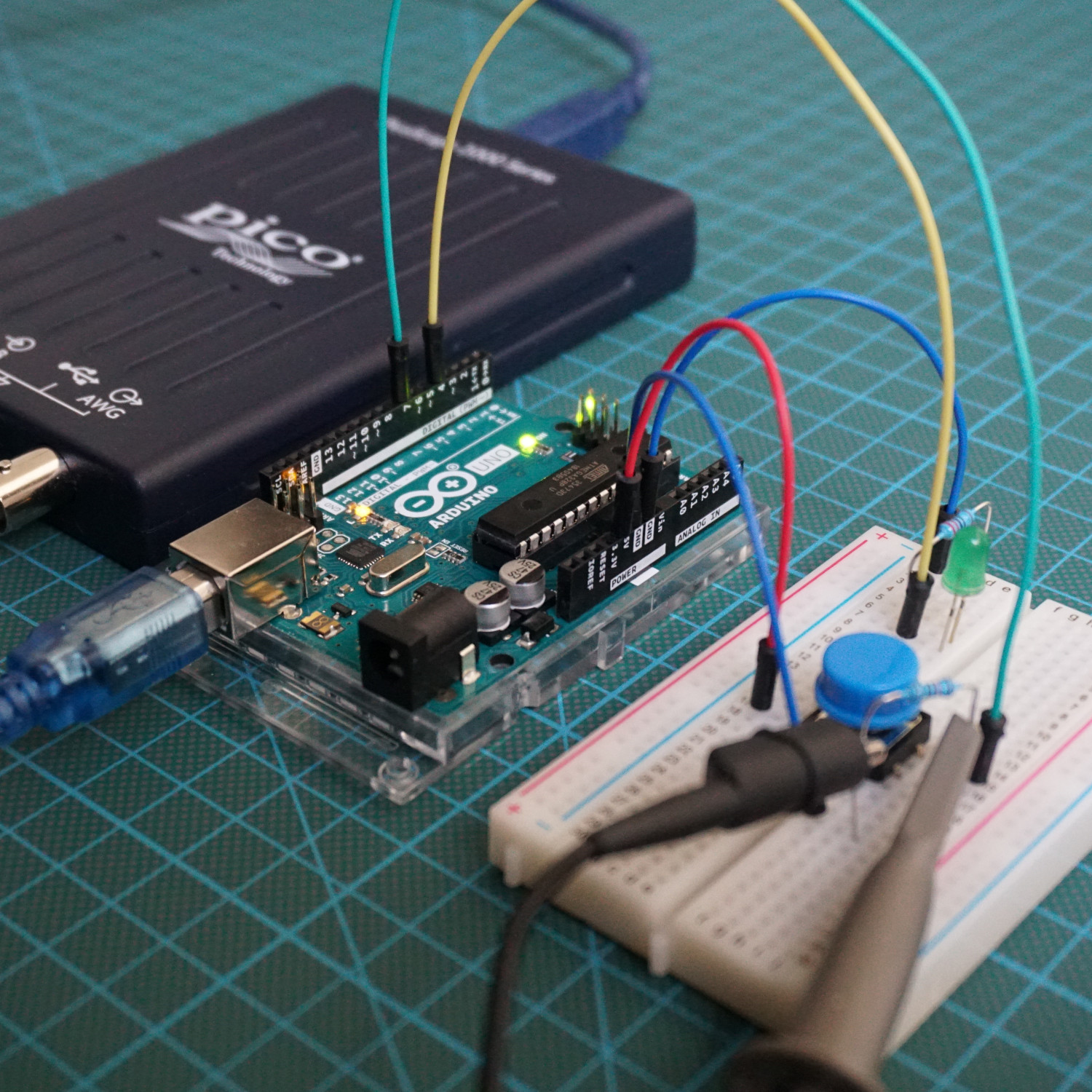 There are two different types of switches:

Buttons and switches can have a debouncing problem, that can lead to functional errors in your program. In this article I show you how to fix this problem with a software and a hardware solution.

How do Switches Work?

You might wonder why the four-pin switch has 4 legs. How do we have to connect the switch to other components?

If the four-pin switch is not pressed, the pins A and C are connected as well as the pins B and D. If the switch is pressed, the connection of the pins changes and all pins are wired together. Therefore there is no difference if you connect your component you want to switch on pin B or pin D of the other side of the button. 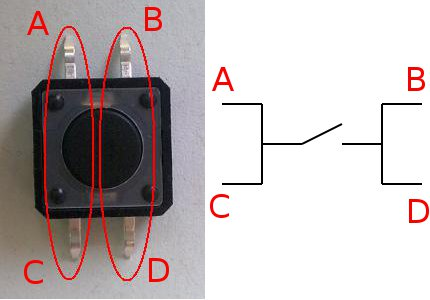 The answer to this question depends on your objective and also you have to add a resistor in the circuit. Otherwise when the switch is open, the digital pin is not connected to GND or to 5V and the pin state would be undefined.

There are two different setups how the resistor is added to the circuit and how the second pin of the switch is connected.

The following section describes the difference between the pull-down resistor and the pull-up resistor and shows how to wire all components with different Arduino, ESP8266 and ESP32 microcontroller boards.

If you create a program, this program is independent of the difference in the circuit if you use a pull-down or a pull-up resistor.

Setup of a Pull-Down Circuit with a Resistor 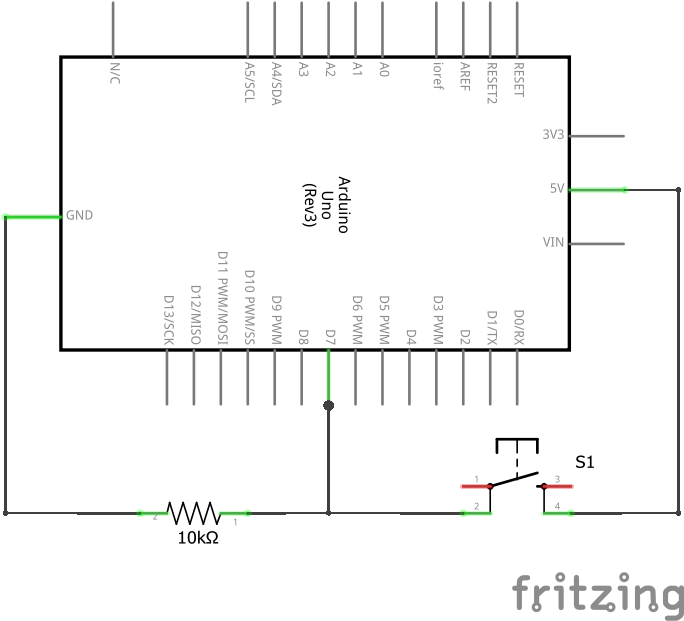 Setup of a Pull-Up Circuit with a Resistor

The following pictures shows the circuit diagram for the Arduino Uno with the pull-up resistor and the wiring for different Arduino, ESP8266 and ESP32 microcontroller boards. 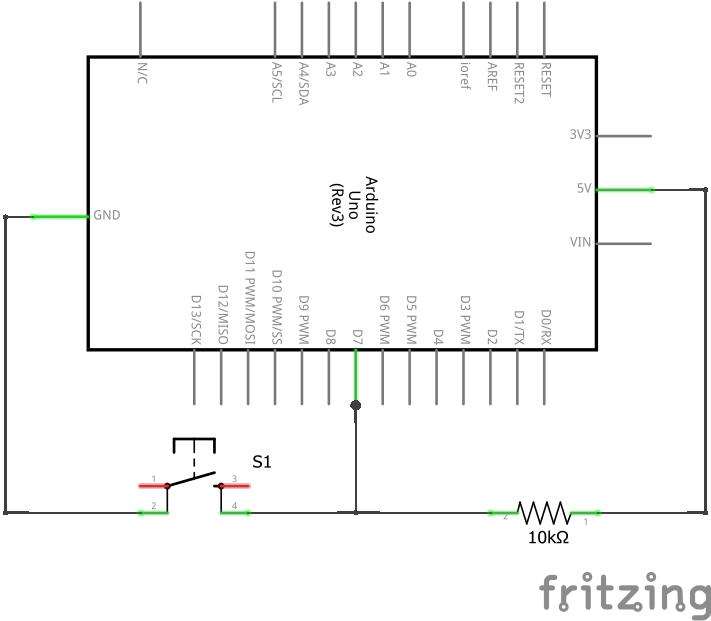 Control a LED with a Pull-Down Resistor and a Button

The following pictures show the wiring between all components on different Arduino, ESP8266 and ESP32 microcontroller boards for the pull-down resistor circuit.

After the wiring, we can dive into the Arduino program code that is very easy to understand and shown in the following box.

In the first part of the program code we have to define the connected pins of the microcontroller. In this example we have the switch and the LED that are connected to the Arduino, ESP8266 or ESP32 microcontroller. Because the script can be used for Arduino, ESP8266 and ESP32 microcontroller boards, you have to select one out of three sections of the program code and comment the other two sections, like I did for the ESP8266 and ESP32, or delete the sections.

In the setup function, we set the baud rate of the serial USB connection to your PC to 9600 that has to be the same in the serial monitor of your Arduino IDE. Also we have to declare the button pin as input and the LED pin as output pins.

The following video shows that the LED turns on, when I press the button.

Change the Functionality of the Button to a Switch

It is possible to change the sketch that the used button has the functionality of a switch. The LED is turned on and off only if the button is pressed and holds its state. Therefore the states of the LED and switch have to be stored in variables to compare the last state with the current inputs. If the button in continuously pressed the states should not be changed.

The wiring is not changed but the following sections shows the program code that is modified.

The first part stays the same, but we have to define two new variables with the initial state LOW that stores the last status of the switch and the LED.

The following video shows the function of the switch in action. From the video, you also see the common debouncing problem that we solve in later chapters of this article.

Control a LED with a Pull-Up Resistor and a Button

With the pull-up resistor, we want that the LED is on when the button is not pressed and if we press the button, the LED should goes off. Basically the functionality is the opposite of the pull-down circuit and has the advantage that you directly know that maybe there is a broken cable in the circuit if the LED is off and you do not push the button. In a pull-down circuit you know that there is a problem inside the circuit only until you press the button. If you have any critical circuits, you should preferer the pull-up resistor.

The following picture show the wiring for the pull-up resistor and button, as well as the LED in combination with different Arduino, ESP8266 and ESP32 microcontroller boards.

Explanation of the Debouncing Problem with Buttons

When a switch or button is pressed, the metal contacts in the contact points can cause the contact points to touch several times. Therefore the contact is bouncing before making a permanent contact. You might ask yourself what problem could occur due the bouncing contacts. The problem is that the Arduino clock speed is 16 MHz which results in 16 million operations per second. So the Arduino will recognize the bouncing contacts as having closed and opened the contacts several times in a row. The following picture shows this behavior on the oscilloscope when pressing a button. 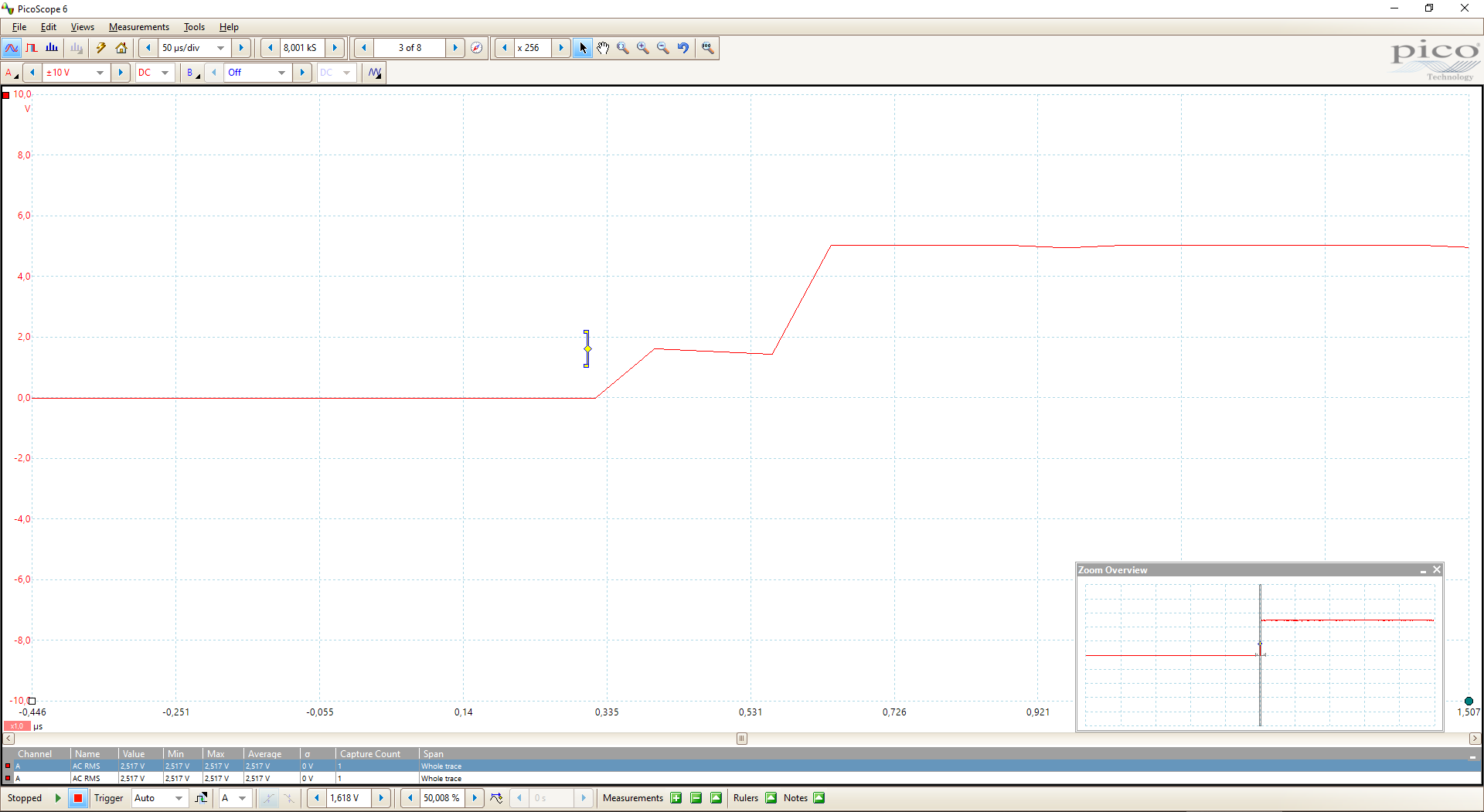 The same behavior can be shown when I try to switch the LED off in the second picture. The operating voltage is 5V and I push the button. Two times the voltage drops to around 4V and jumps back to 5V. The third time the voltage drops to around 1V but also jumpy back to 5V. Only when I push the button a forth time the switch is released and the LED goes off.

This behavior is a big problem in real live because to you want to push a button multiple times to switch on or off a light in your kitchen? I do not think so.

Good to know that there are two software and one hardware solution to fix this behavior called the debouncing problem.

As far as I know, there are two software solutions against the debouncing effect. In the following sections I explain both solutions before I also show you a hardware solution.

Add a Delay when reading the Button State

The first software solution is quite simple and initiates a delay and then rereads the state. The time between the two input reads is defined by a delay. If the delay is too short, the switch may be still bounding.

You see in the following pictures of the oscilloscope that the press and release voltage is more smoothly than without a software solution. This results in the behavior that when the button is pressed once, the LED turns on or off. The following video also shows the result of the software solution against debouncing. 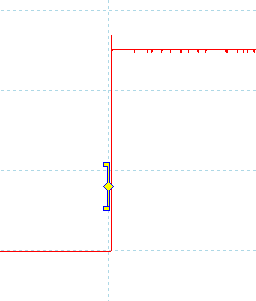 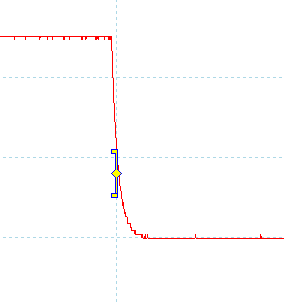 Save the States of the Button - Not Recommended

A second possible software solution against debouncing is to continue delaying until there is no longer change in the switch state at the end of the debounce time. Therefore the state of the switch has to be stored at three different times:

If the state has changed and is present longer than a predefined debounce time, the state of the LED can be changed. To compare the debounce time with the time, the switch was last pressed we have to define the time the switch was last pressed as unsigned long variable because the integer number has an upper limit of (2^15-1) ms or 33 seconds. The unsigned long maximum value is (2^32-1) ms or 50 days.

But there is also a much better solution than saving the state of the switch 3 times because it is also possible to solve the problem with the debouncing switch with a capacitor hardware solution.

Hardware Solutions Against the Debouncing Problem

Because we do not add any software solution for the debouncing problem, we can use the standard switch Arduino script that we build in the previous chapter.

The following two videos show the impact of the hardware solution against the debouncing with a 10µF and a 100µF capacitor. From the video, you see that the 100µF capacitor is powering the LED much longer than the 10µF capacitor if I push the LED off with the button.

In the following picture you see the voltage rise during the button press. It is very similar to the software solution. 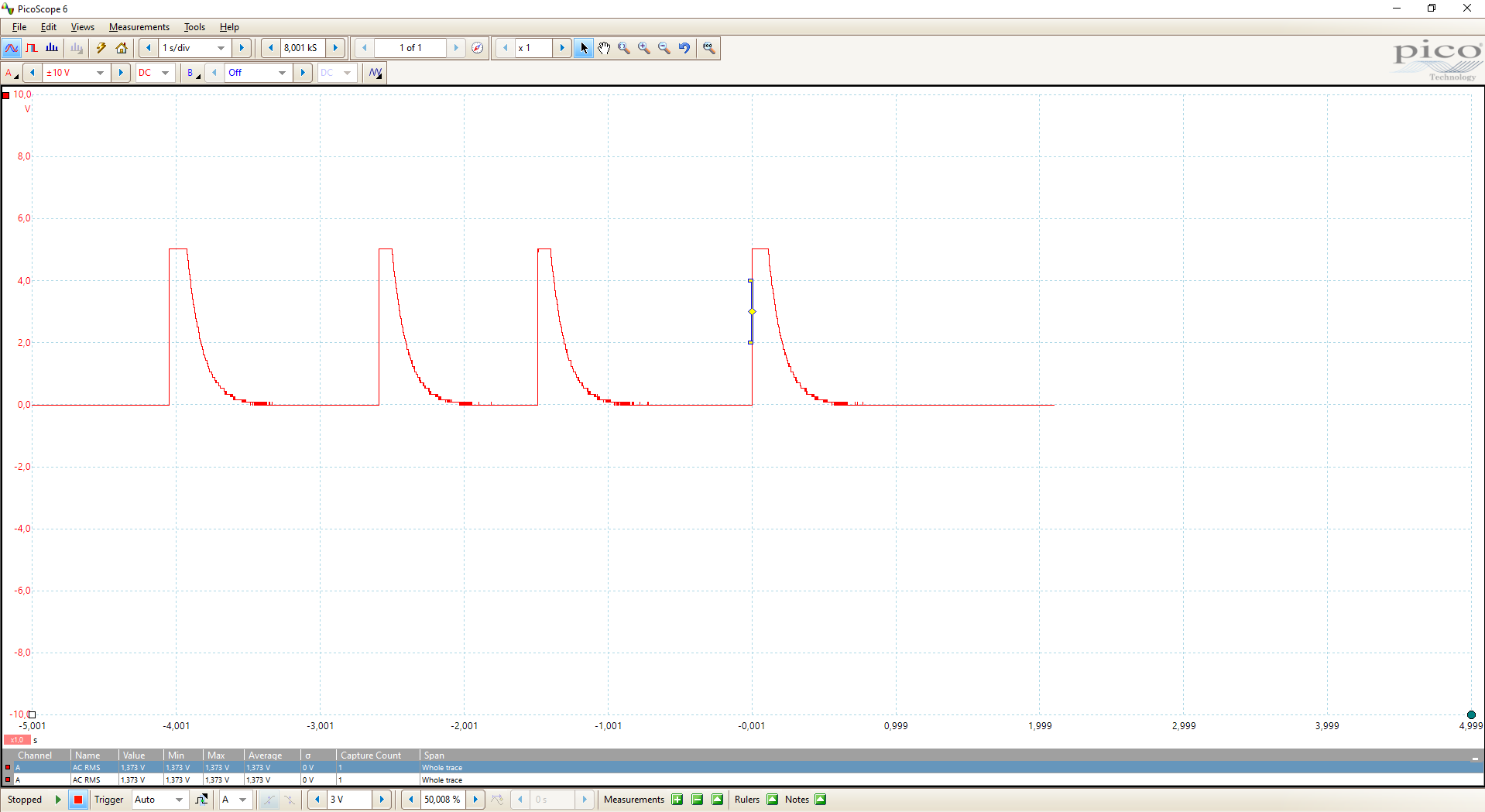 In this article you learn about different kinds of switches and the pull-up and pull down resistors, how to use them and the differences. Also you learned what the debouncing problem is. Moreover we discussed hardware and software solutions against the debouncing problem.
I hope you enjoined this article. Do you have any further questions about switches? Use the comment section below to ask your questions.