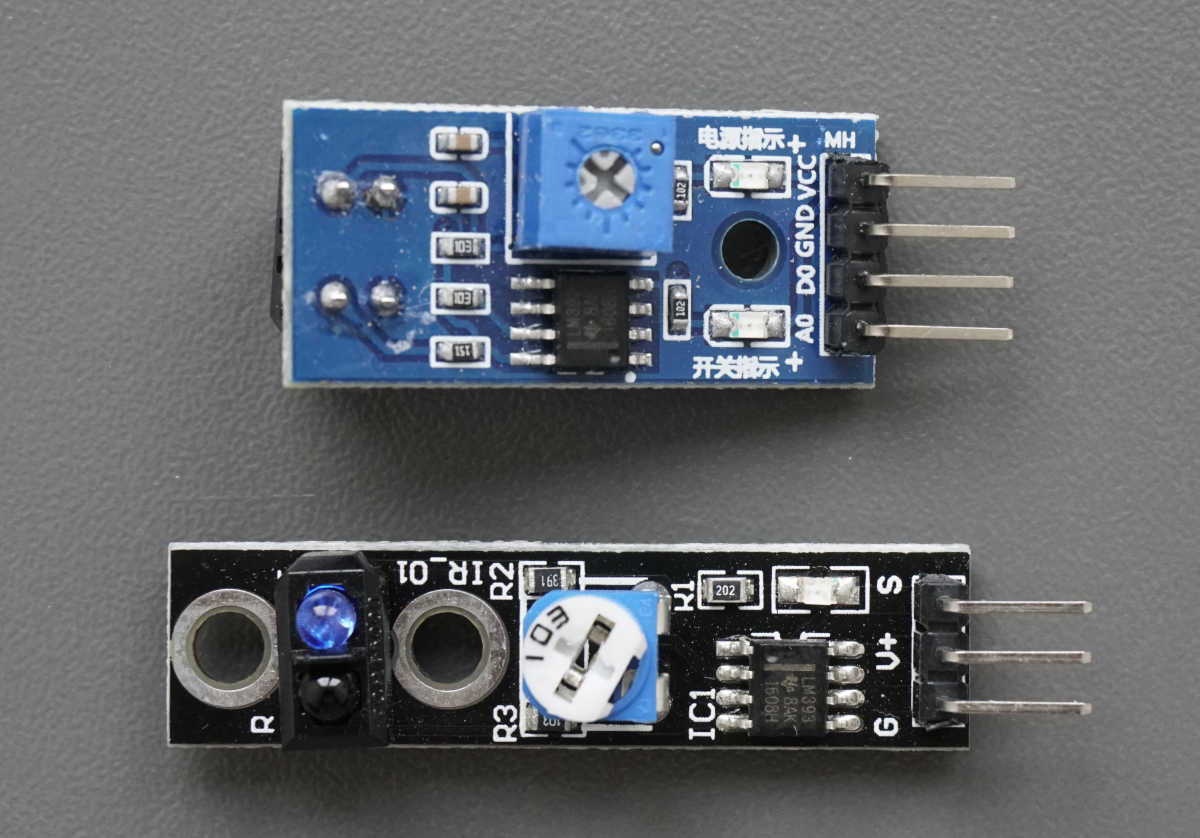 The TCRT5000 Line Tracking Module is an infrared distance module that is most used for robot applications like a line following robot, product line decoder or other robot projects.

In this tutorial you learn the pinout and schematic of two different TCRT5000 line tracking modules.

At the end of the tutorial, you learn how to build a line decoder that can also detect objects.

The following table shows the technical specifications for the TCRT5000 module.

The TCRT5000 module has an operation voltage between 3V and 5V that is perfect for all Arduino, ESP8266 and ESP32 microcontroller boards. The wavelength of the emitter LED is 950 nm that is on the top end of the infrared electromagnetic spectrum. 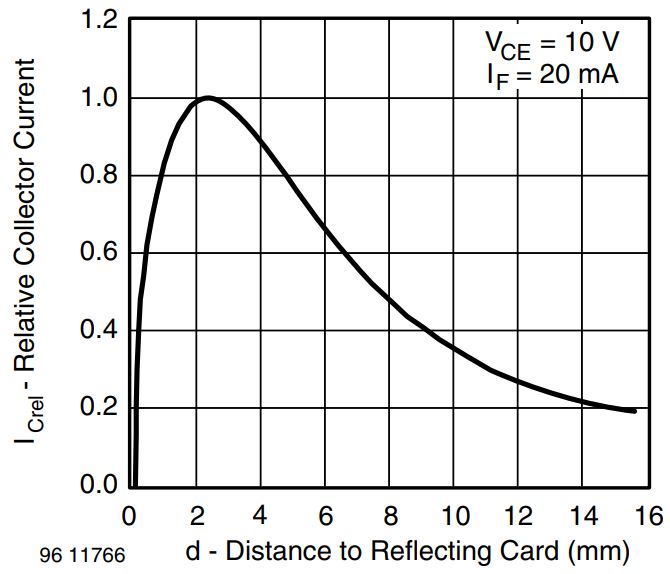 From the chart you see the distance between the TCRT5000 module, and the surface should be greater than 1mm but not higher than 6mm to increase the relative collector current.

There are two different TCRT5000 line tracking modules on the market. The major difference is that one module has an analog output that the other module does not have.

The following picture shows the pinout and the electronic components of the two different modules. 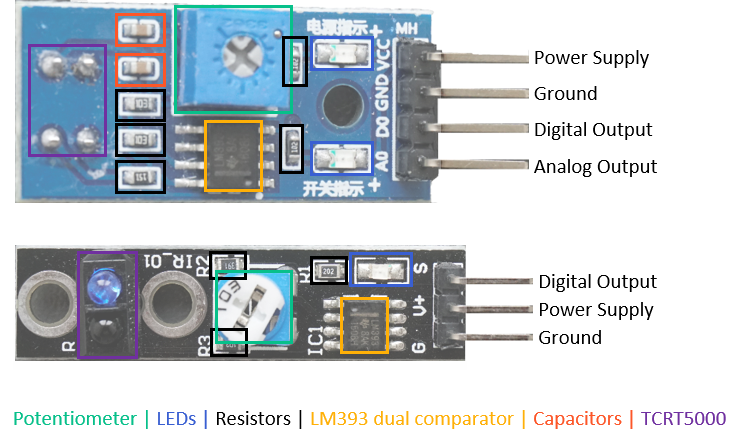 The TCRT5000 modules consists of the following electronic parts:

Schematic of the TCRT5000 Module with Analog Output 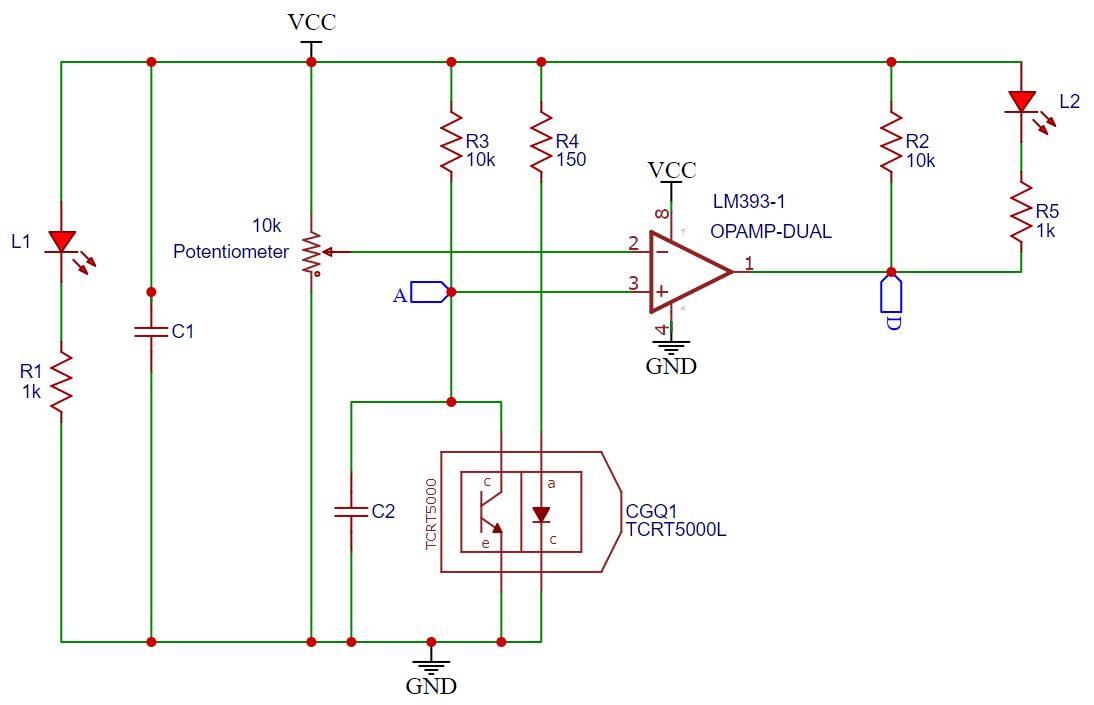 The module uses only one of the two comparators of the LM393 dual comparator. The output of the LM393 is numbered as 1 and the input 2 and 3. I use them as reference points in the following description of the schematic.

The TCRT5000 consists of two electronic parts that are also shown in the schematic:

On the top of the schematic, we see that if VCC and ground is connected, the circuit over the resistor R1 (1kΩ) and LED L1 is closed. Therefore, LED L1 shows that the line tracking module is operating.

The capacitor C1 is also connected between VCC and GND to stabilize the operation voltage and would not be necessary if you use a stable power supply like the Arduino, ESP8266 or ESP32 microcontroller board with 3.3V or 5V voltage regulator.

If the module has a valid power supply, the infrared diode that is protected by resistor R4 (150Ω) against too high voltages starts emitting IR. 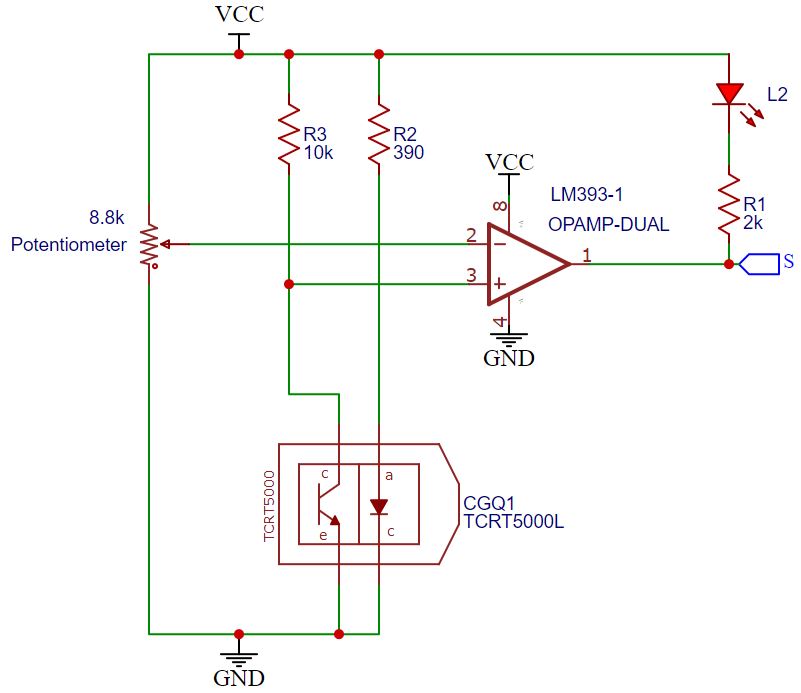 The KY-033 module uses only one of the two comparators of the LM393. The output of the LM393 dual comparator is numbered as 1 and the input 2 and 3. I use them as reference points in the following description of the schematic.

The TCRT5000 consists of two electronic parts that are also shown in the schematic:

The input voltage of the LM393 comparator (3) is the output of the voltage divider that is created by the resistor R3 (10kΩ) and the transistor of the TCRT5000.

If the module has a valid power supply, the infrared diode that is protected by resistor R4 (390Ω) against too high voltages starts emitting IR.

The KY-033 TCRT5000 module has no analog output, no capacitors, and no LED to indicate a valid power supply.

Functionality of the TCRT5000 Module

After we know the schematic of the TCRT5000 modules, the functionality is not hard to understand. For the functionality, it is important to know that higher infrared radiation results in a lower resistance of the infrared receiver and therefore in a higher voltage drop across the IR receiver. You can see this dependence also from the following picture, that you find in the datasheet of the TCRT5000.

The potentiometer must be calibrated in a way that if there is no relevant infrared radiation, the reference voltage of the comparator (2) has to be higher than the input voltage (3) that equals the voltage drop across the IR receiver and the analog output. In this case, the output of the comparator (1) and therefore the digital output of the TCRT5000 module is equal to 0V. Because there is a potential difference between resistor R5 or R1 for the KY-003 and LED (L2), the LED is on.

If the received infrared radiation increases and for this reason also the analog output, the input voltage (3) of the LM393 exceeds the reference voltage (2), controlled by the potentiometer. Then the output of the LM393 dual comparator (1) switches from 0V to VCC and there is not longer a potential difference between resistor R5 or R1 for the KY-003 and LED (L2). In this case, the LED (L2) switches off.

The following pullet points summarize the functionality of the TCRT5000 module with analog output and the KY-003 module:

The following table and pictures show the wiring between the TCRT5000 module with analog output and different Arduino, ESP8266 and ESP32 boards.

The following table and pictures show the wiring between the KY-033 TCRT5000 module and different Arduino, ESP8266 and ESP32 boards.

In our program example we detect objects in front of the sensor and the influence of different surfaces and surface colors that is used to build a line decoder that you see in many Arduino robot projects.

Because we use in this tutorial two different TCRT5000 module, I split the program example also in two subsections.

Influence of Different Surfaces on the Line Tracking Module

In the setup function, we set the baud rate to 9600 that has to be the same baud rate like in the serial monitor of the Arduino IDE and we define the digital pin as input, because we want to read the digital state of the TCRT5000 module. The analog pin is not defined as input.

The loop function is super simple, because we only read the analog and digital value of the line tracking module and print the values to the serial monitor of the Arduino IDE. After a short delay of 1 second, the loop function starts all over again.

The following screenshot shows the output of the serial monitor and the video shows the result, measuring the difference between a white and a black surface.

The KY-033 TCRT5000 line tracking module does not have an analog output to measure a distance between the module and an object. But with the digital value and the distance threshold that can be adjusted with the potentiometer, we can build an object detector that is able to navigate a robot car through a parkour.

If an object gets in front of the module, we want to turn on the internal LED of the microcontroller board, but you could also activate a function that for example turns a robot car 90 degrees and check if there is still any object in front of the car.

For the loop function, we create an if statement that reads the digital state of the KY-033 TCRT5000 module. If the state is HIGH, the internal LED tuns off and otherwise the internal LED is on.

The following video shows the result that the internal LED lights up, when the object is detected by the KY-033 TCRT5000 module.

Do you have any further questions about the different TCRT5000 modules? Use the comment section below to ask your questions. If you plan to use a distance sensor for a DIY project, check out the article about the ultrasonic distance sensor, the infrared sensor in general and the HC-SR501 PIR motion sensor.