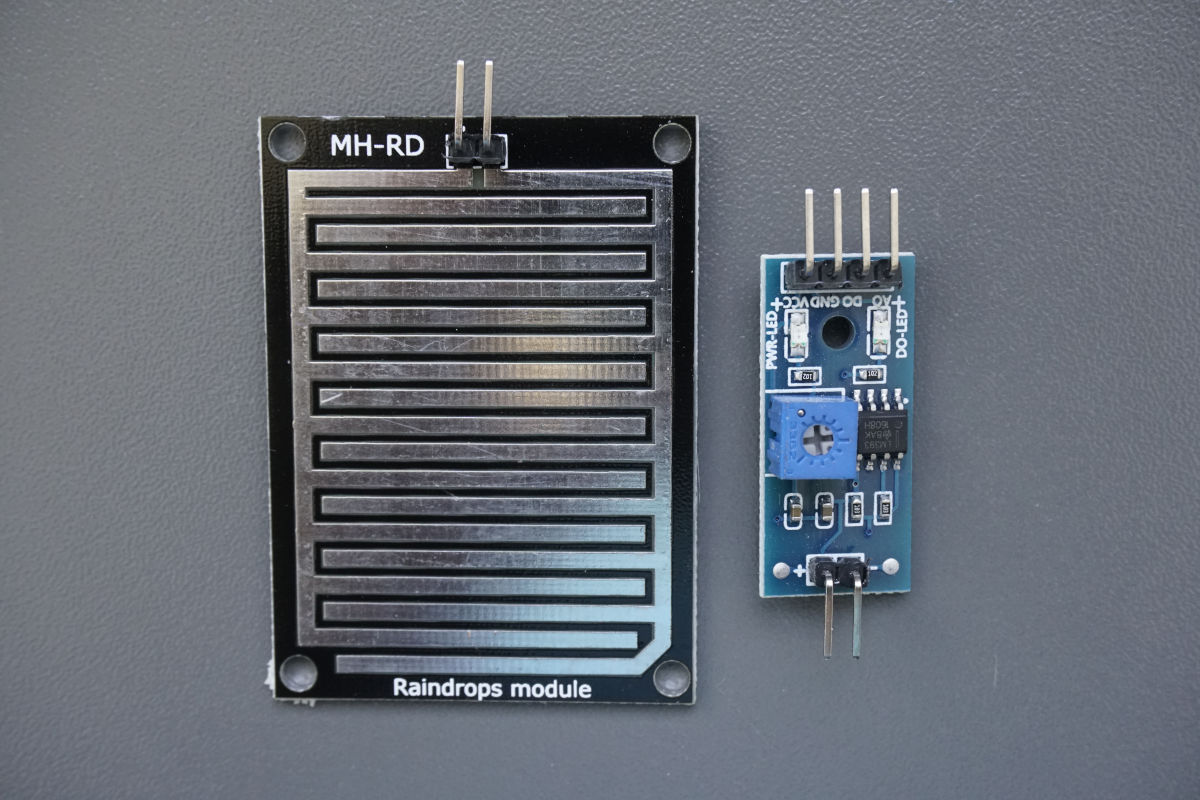 If you want to use the rain sensor for a long time, you learn in the last example how to increase the lifetime of the sensor.

What is a Rain Sensor for Microconrollers?

Rain Sensors also called raindrop sensors are very handy sensors that are used in a variety of use cases. Alone a rain sensor can only detect if it is raining and how strong it rains but in combination with other electrical devices you can build useful applications.

For me the most useful application is to detect an open window when it starts to rain because I am often not sure if I closed a window after I left the house.

The rain sensor consists of 2 components, which we consider in more detail below:

Functionality of the Rain Drop Module

The rain drop module is a printed circuit board in a rectangular shape. The size can differ between models but the construction is the same for each model. The ground plate of the circuit board consists of fiber reinforced plastic that is not conductive. On top of this ground plate there are two pins mounted. From each of these pins starts one conductor track, build like an “E” with an offset against the other conductor track. Therefore the tracks are not connected but the conductor tracks are close together. 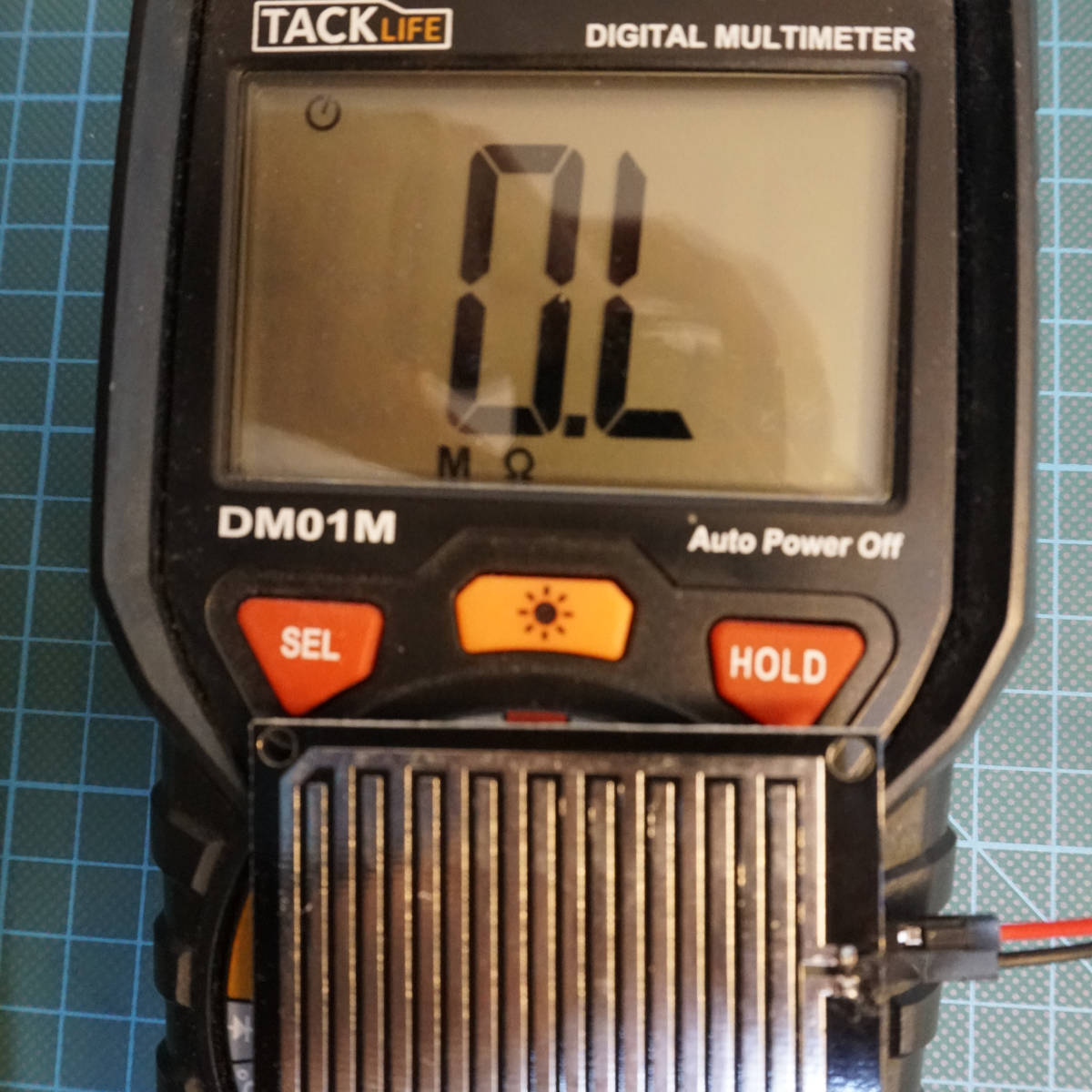 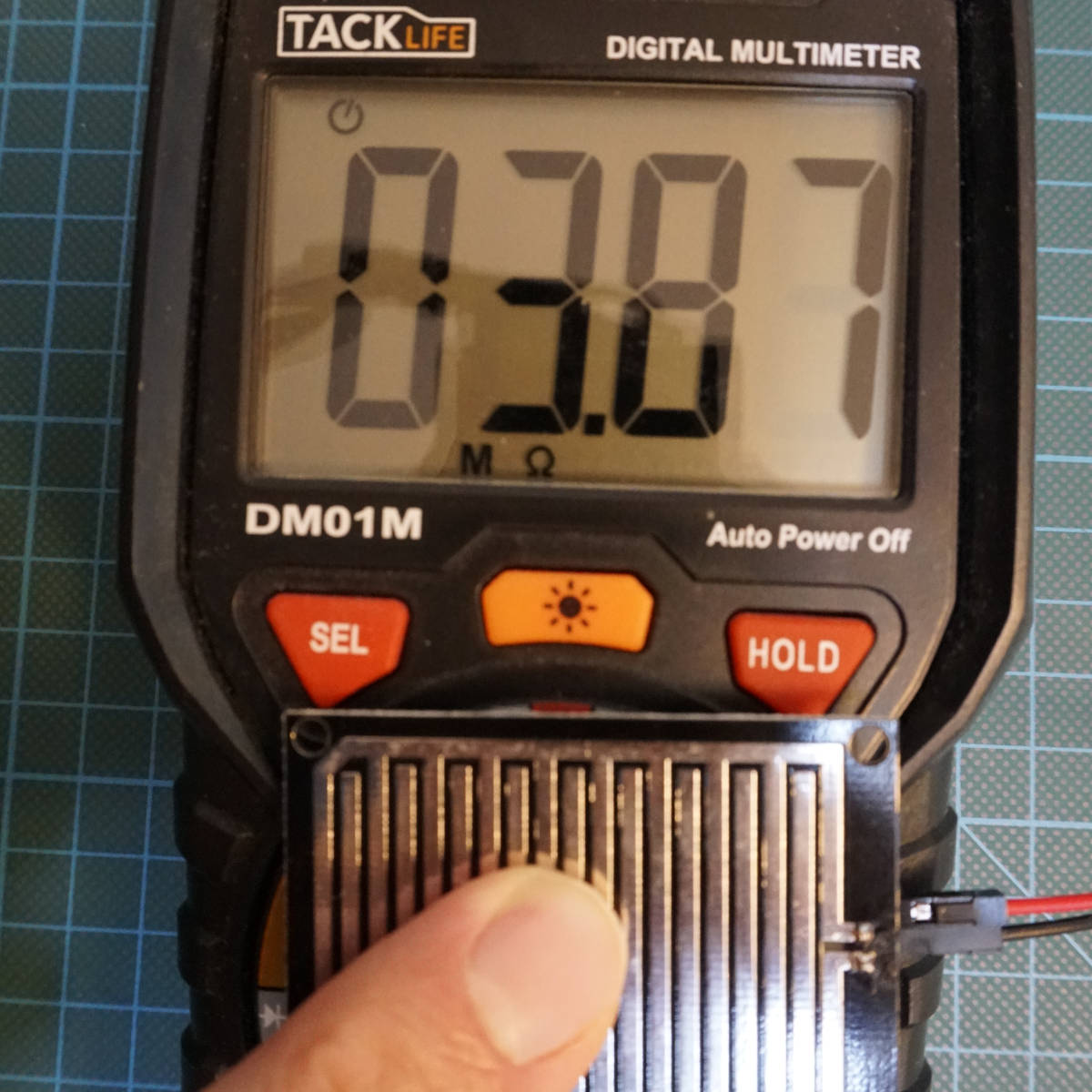 Why does Resistance Change on a Rain Drop Module?

The schematic illustration shows the difference between a variety of states for the rain board. With no rain there is no connection between the two copper tracks and the resistance is infinite.

If there is heavy rain, more and more rain drops falling on the board and further decrease the resistance until the resistance is 0Ω and the circuit is shorted.

Now we have to make sure that we can measure the change of the resistance. If your read my resistor tutorial, you know that this can be done with a voltage divider.

Functionality of a Voltage Divider

The following picture shows a voltage divider consisting of two resistors. In our case R2 is the resistor of the rain board. R1 is a reference resistor with a known resistance. From the equation you see that if we know the supply voltage U, we can calculate the voltage drop over the rain board.

But where do we find the voltage divider? This function has among other things the control board.

Functionality of the Control Board of a Rain Sensor

The control board consists of two input pins and four output pins. The input pins are connected to the rain board and the output pins to your favorite microcontroller, for example an Arduino Uno or an ESP32 NodeMCU.

On the control board you find multiple resistors that also functions are the voltage divider to provide an analog signal for the rain intensity. Therefore as input we get a resistance from the rain board and the control board converts this resistance into a voltage drop between the analog pin and ground. The microcontroller uses the internal analog to digital converter (ADC) to convert the voltage from the analog pin to a digital value between 0 and 1023 that can be printed to the serial output in your Arduino IDE.

But who does this comparison between the two resistances? This is done by the LM393 comparator because the voltage drop over both resistors is linear to their resistance due to ohms law. The LM393 consists of two independent precision voltage comparators and is specially designed to operate from a single power supply, in our case the microcontroller. You find more details about the LM393 on the website of Texas Instruments.

From the following picture you see that the combination of a potentiometer and the LM393 comparator is very often used for different kinds of sensors where you have to convert an analog signal to a digital signal via the threshold of the potentiometer.

The control board is powered from the 5V pin of the Arduino microcontroller board. For the analog and digital connection, you can use any digital I/O and analog pin on your board, but if the connection differs from the one in the pictures, make sure that you define the correct pins in the following sections with the program code.

If you are missing an Arduino microcontroller board, please write a comment in the section below this article and I will add more fritzing pictures of the wiring of the rain sensor. You can also enlarge the wiring pictures by clicking on them.

The wiring between different ESP8266 boards and the rain sensor module is shown in the following pictures. For the power supply, I take the VIN and 5V pin from the USB converter, but you can also use the 3.3V pin instead because the control board operates also with a voltage of 3.3V.

If you are missing an ESP8266 microcontroller board, please write a comment in the section below and I will add more fritzing pictures of the wiring of the rain sensor. You can also enlarge the wiring pictures by clicking on them.

If you are missing an ESP32 microcontroller board, please write a comment in the section below and I will add more fritzing pictures of the wiring of the rain sensor. You can also enlarge the wiring pictures by clicking on them.

Read the Analog and Digital Output of the Rain Sensor Module

In this example we can use the wiring from the previous chapter and want to print the analog and digital sensor values to the serial monitor. Additionally we use the serial plotter of the Arduino IDE to show the time-series chart of the analog output.

The following sections shows the Arduino program code for this example.

In the setup function I set the baud rate of the serial connection to 9600 that have to match to the serial output setting of the Arduino IDE to print the values. Also I have to set the digital pin as input because I want to read values at these pin.

To view the time series chart of the analog rain sensor we print the analog and digital value to the serial output and with a short delay of 200 milliseconds we pause the script at the end before the loop is executed again.

The following two picture show the serial monitor and the serial plotter of the Arduino IDE. You see clearly that the sensor value drops when I touch the rain board with my dry or wet finger. You can click on each image to enlarge it.

Analog and digital output of the rain sensor module, visualized by the serial monitor 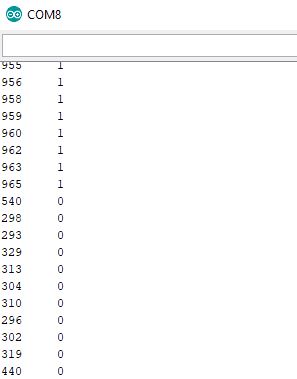 Analog output of the rain sensor module, shown as time-series chart with the serial plotter 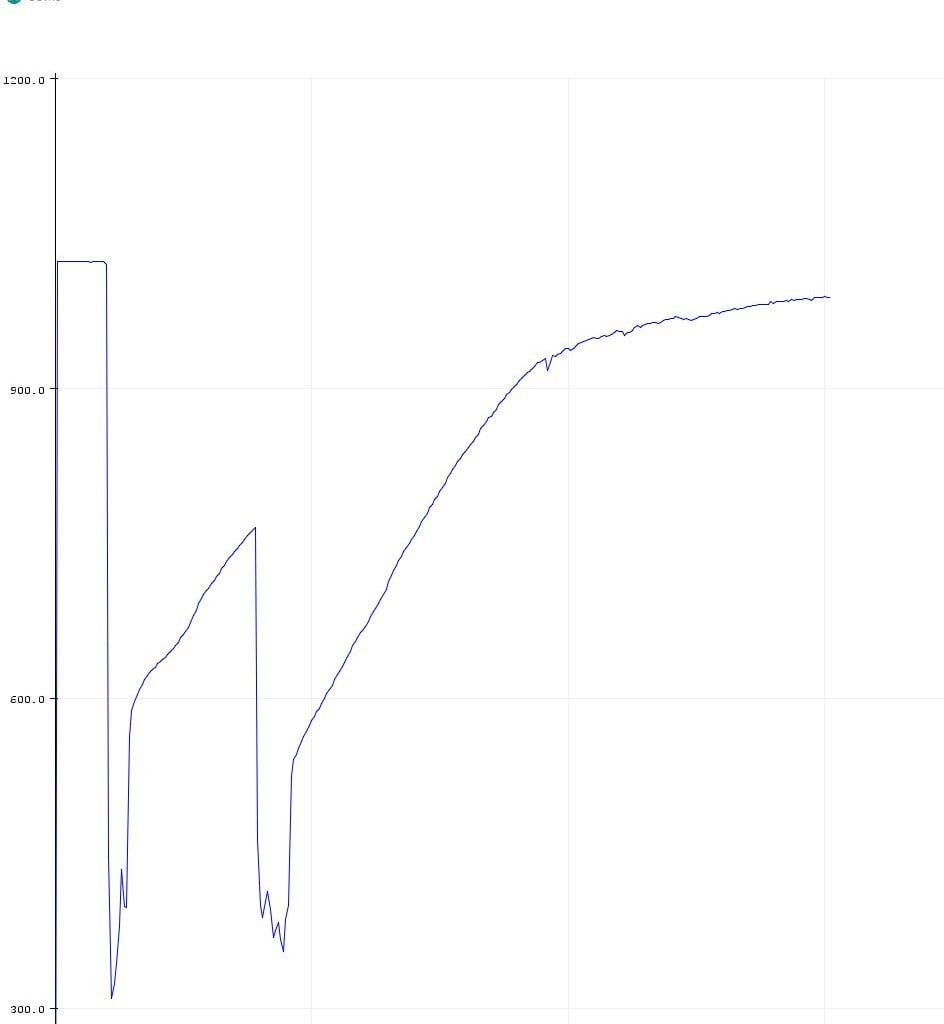 Bonus: Increase the lifetime of the rain sensor

Due to the current flow and the contact with water, the rain sensor will build rust from electrolysis that damages the sensor and makes the sensor inaccurate. How strong the electrolysis will be depends on three different factors:

Moreover we do not connect the Arduino, ESP8266 or ESP32 microcontroller direct to the rain sensor, but we use a MOSFET to disconnect the rain sensor completely from the circuit when we do not need to read the analog sensor value. I use the IRLZ44N MOSFET because this logic level MOSFET responds also for low voltages between 2.5V or 5V.

The following picture shows the new wiring with an Arduino Uno as example. 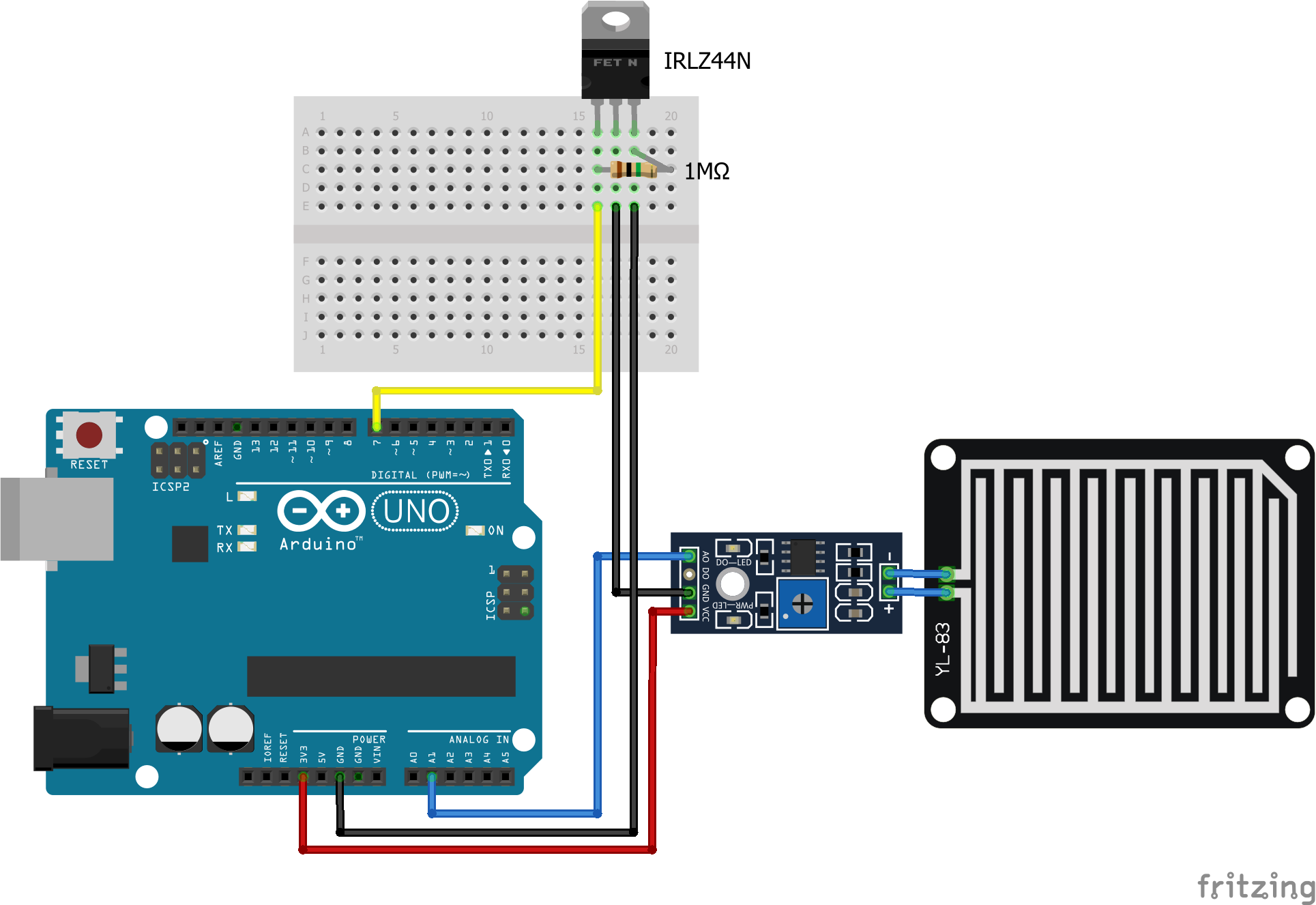 From the fritzing picture you see also that I use an 1MΩ resistor to protect the gate to source from electrostatic discharge.

With this change we reduce the operation voltage to 3.3V and with the digital pin we can control when the digital pin is set HIGH to to turn on the rain sensor and when to set the pin LOW to shut down the sensor.

One downside is that the internal analog to digital converter (ADC) of the microcontroller has 5V as reference voltage and now not the full value range is used for the analog signal. You see the reduced maximum analog value in the last picture of this article.

I also build the digital value based on the analog value in the Arduino script and not by the analog pin of the control board. Therefore I do not have to connect the digital pins.

The following lines show the new script and the changes that we have to make.

The first change we make is to define two new variables:

The variable for the digital value is deleted in the define block at the beginning of the script and also in the setup function.

In the loop function we turn on the control board by setting the pin of the sensorPower HIGH and let the power settle before we read the analog value. The boolean value is built by a simple if else function. In my example I choose 100 as the threshold but you can choose a different value if you want. After the analog and digital values are calculated we turn off the rain sensor by setting the power pin LOW.

The following picture shows the output of the Arduino script with a maximum analog value of 131 instead of 1023. 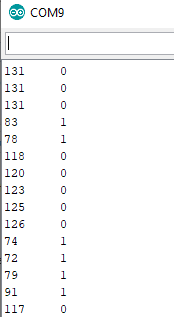 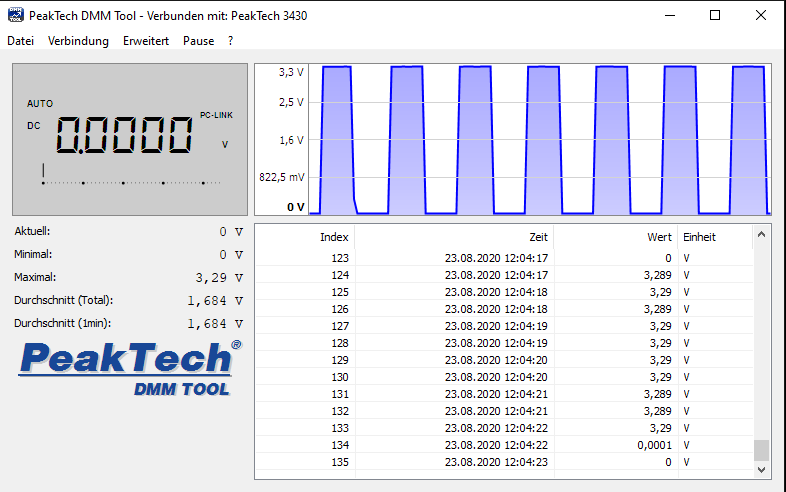