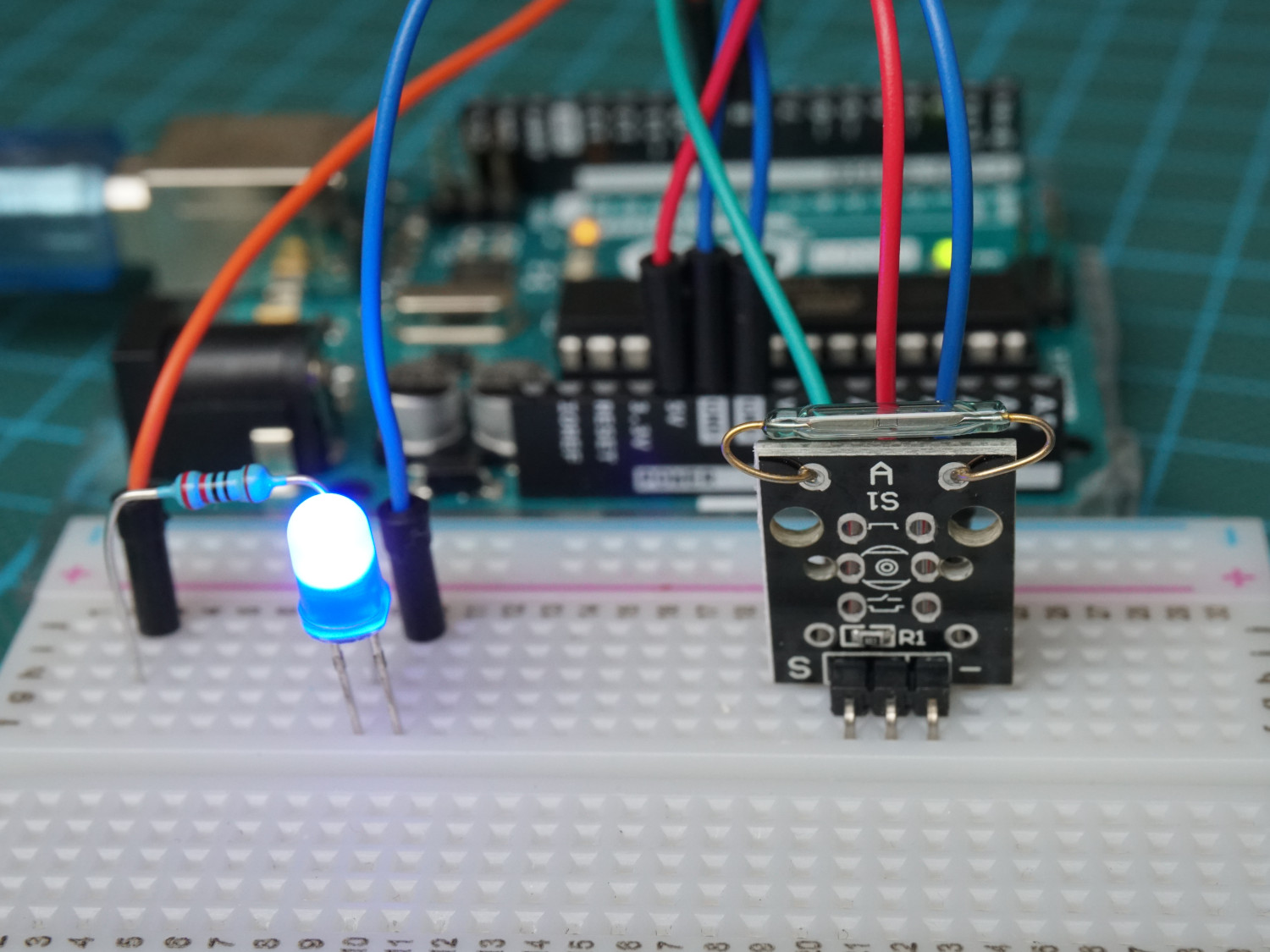 In this article we use the KY-025 and KY-021 reed switch modules with different Arduino, ESP8266 and ESP32 boards to turn on a LED based on a magnet.

I show you how to connect both reed switches with the different microcontroller and how to program the script to read the analog and digital sensor values. 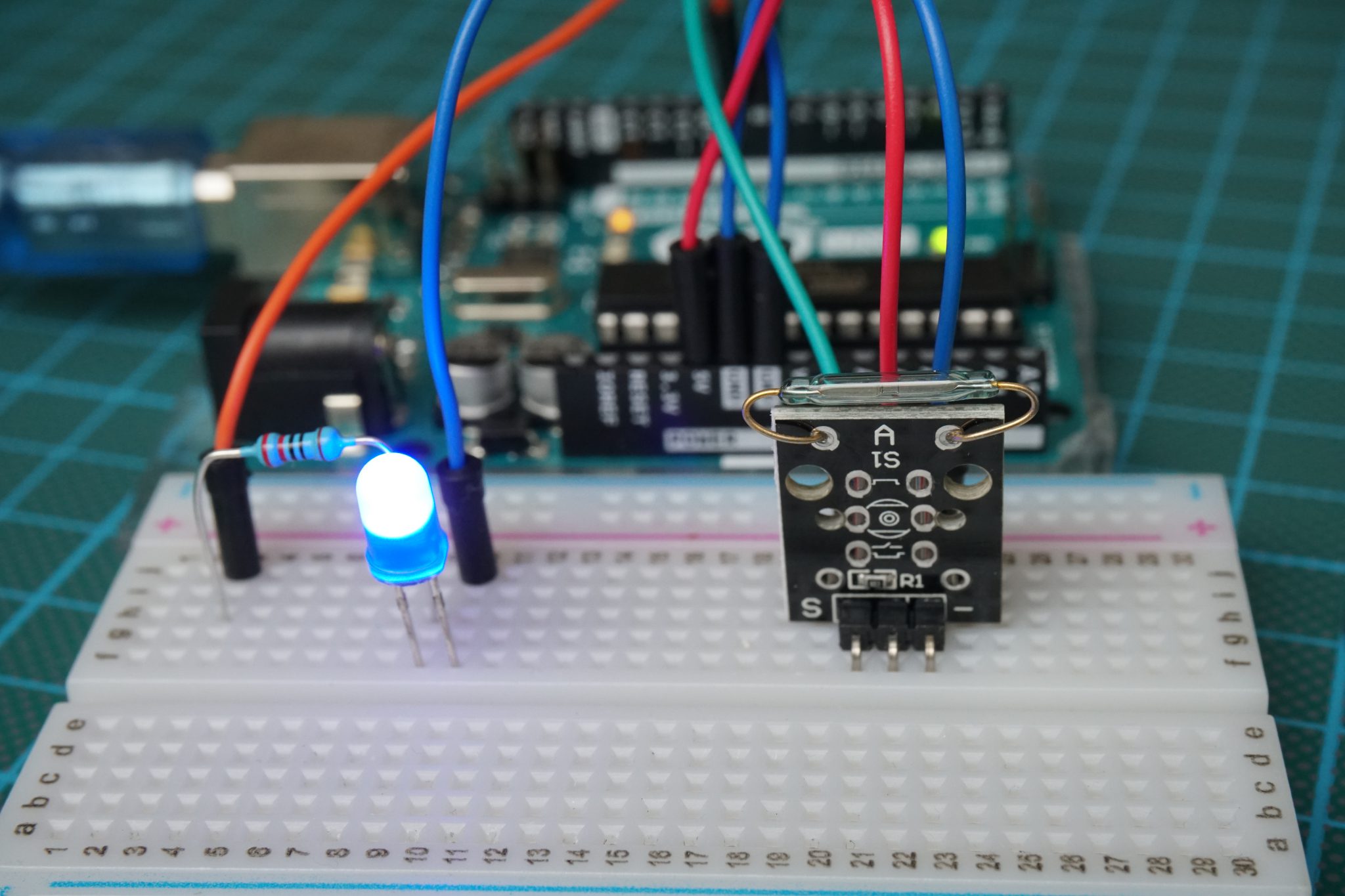 How does a Reed Switch work?

The following picture shows the contacts of a reed switch to understand its functionality in detail. 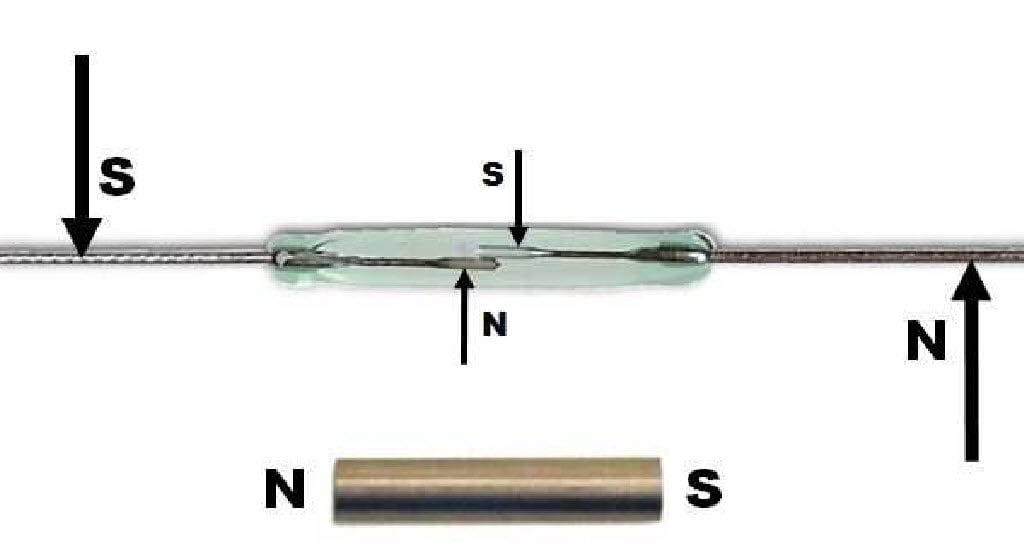 The picture shows that the reed switch consists of two magnetizable metal contacts, called reeds. These contacts are relatively thin and wide to make them flexible. Between both contacts there is a small gap when the reed switch is normally open without a magnetic field.

A magnetic field from an electromagnet or permanent magnet cause the reeds to attract to each other and close the circuit. In the next chapter you learn that the direction of that magnetic field has an influence on the reed switch.

When the magnetic field is removed, the contacts return to their initial position and therefore open the contacts of the switch.

A very common application of reed switches is to detect if a door or window is open or closed. Therefore you have one side of the sensor with the reed switch and an other side with the magnet.

Magnet is parallel to reed switch

This is the perfect setup between reed switch and magnet because the build up magnetic field is parabolic. You find this setup also in door or window reed switches.

Magnet is perpendicular to reed switch

In this setup the magnetic field has a dead zone in the middle of the reed switch. Therefor do not use the magnet and reed switch in a perpendicular setup.

The following video shows the influence of the direction of the magnetic field on the reed switch.

In the following table you find the comparison between the two magnetic switches with the advantages and disadvantage and also how the magnet – sensor orientation has to be.

If you are interested in the (magnetic) hall sensors, I wrote a complete tutorial for this as well.

There are two reed switch modules on the market. The KY-025 and the KY-021. The following table compares the technical data sheet between these two reed modules.

With the KY-025 we gain much better flexibility, because we are able to measure the strength of the magnetic field with the analog output and are able to define the threshold with the potentiometer for our self. 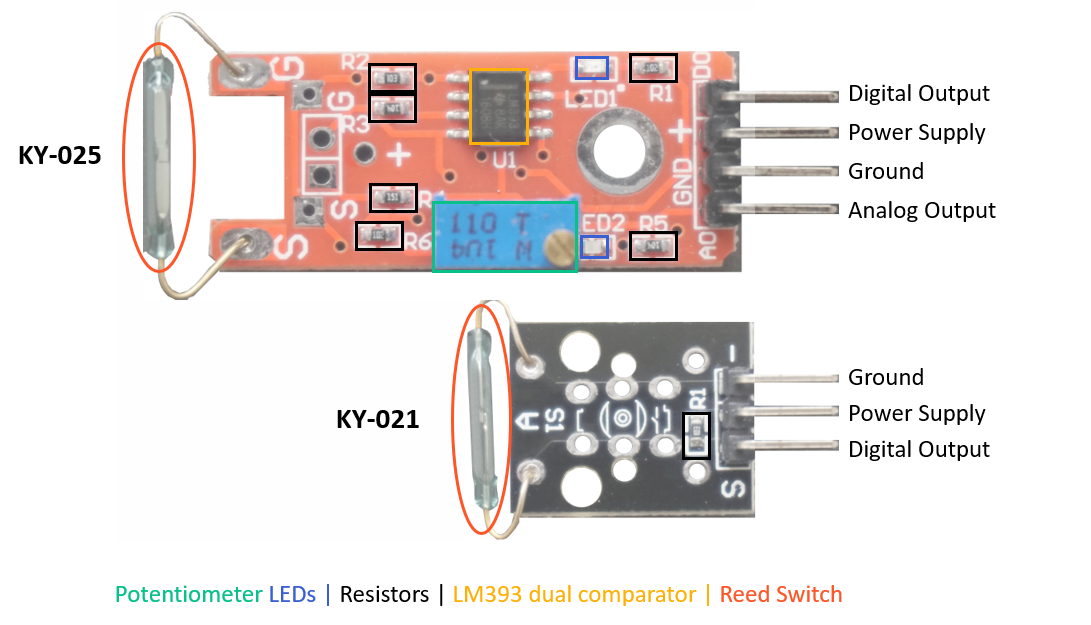 The comparison between the KY-025 and KY-021 modules showed that the output between both reed switch modules differ. From the picture above, we see that this difference leads to a different pinout. The KY-025 has, in addition to the two pins for the power supply, one pin for the digital and one pin for the analog output.

The KY-021 on the other hand has only the pins for the power supply and one output pin for the digital output.

Schematic and Functionality of the KY-025 Reed Switch

After the comparison between the KY-025 and KY-21 module, I want do dive deeper into the schematic of the KY-25 module and its functionality. This part is optional and only for you, if you want to gain deeper knowledge of the KY-025 module.

Schematic of the KY-025 Reed Switch

The following picture shows the schematic of the KY-025 reed switch module with all its electrical components. I will explain every part of the circuit in detail so that you understand the functionality. 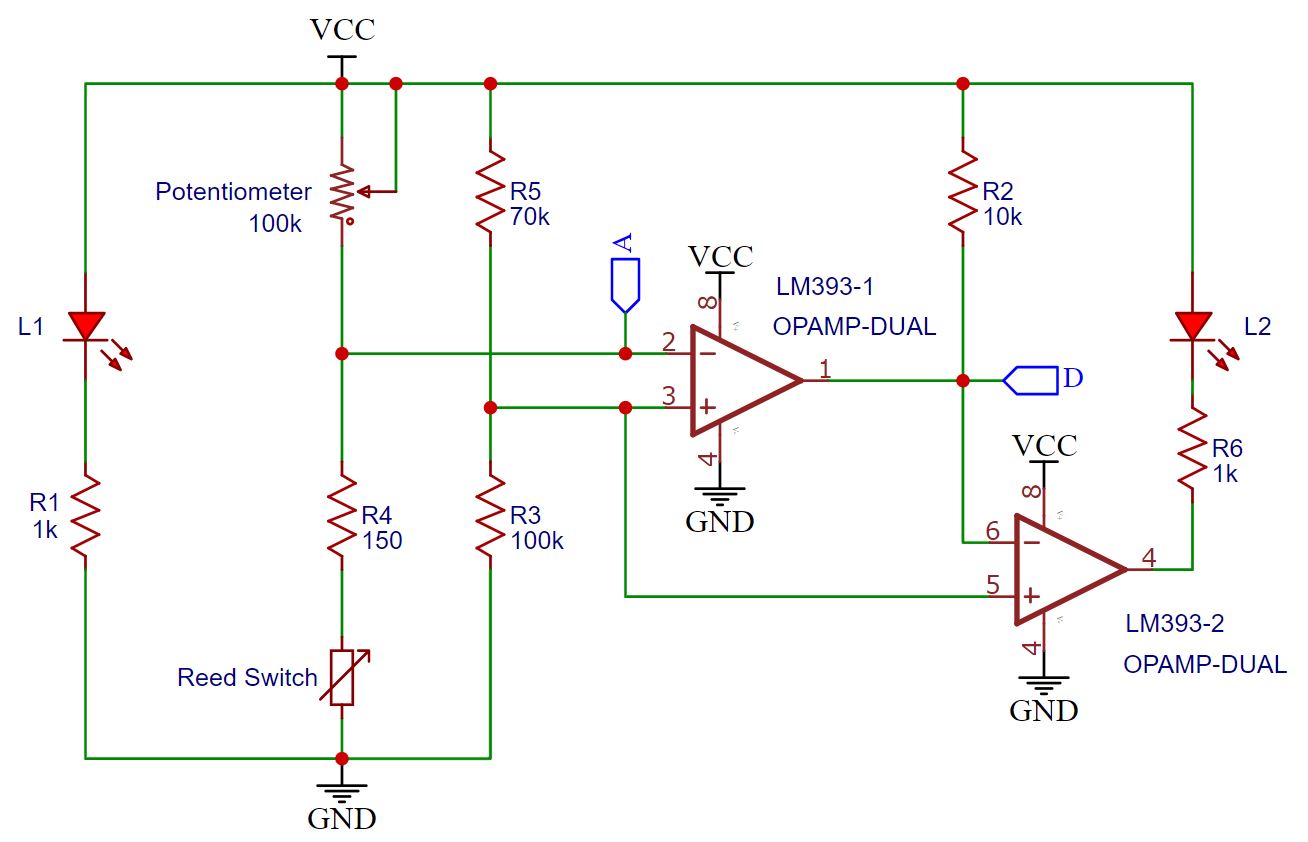 Functionality of the KY-025 Reed Switch

Now we have to consider the two main cases for operation:

Schematic and Functionality of the KY-021 Reed Switch

After we learned how the KY-025 works, we dive also into the schematic and functionality of the KY-021 reed switch module. Again this section is special knowledge about the KY-021 module and therefore optional for the whole tutorial.

Schematic of the KY-021 Reed Switch

The schematic of the KY-021 reed switch module is very easy and shown in the following picture. 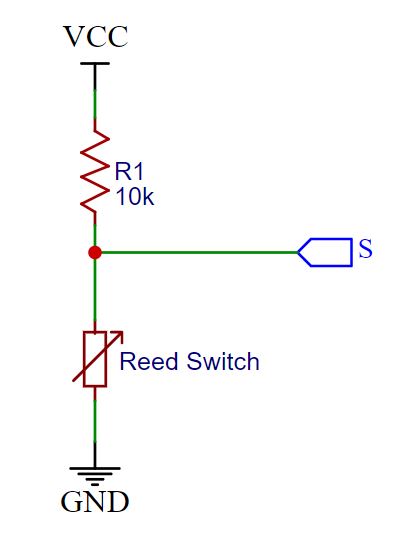 Functionality of the KY-021 Reed Switch

We have to consider the two cases main cases:

In the following example we want to read the analog and digital value of the KY-025 reed switch.

The setup of the threshold is very hard because the sampling rate of the serial communication is not very high. Therefore we can use an oscilloscope with a high sampling rate connected to the analog pin to see the current voltage of the analog pin that is changing when the potentiometer is changed.

To stimulate the reed switch I use a magnet with 2 sides (north and south).

The following pictures show the wiring between the KY-025 reed switch and different Arduino, ESP8266 or ESP32 microcontroller boards. For the power supply you can either use the 5V output like I did for the Arduino boards or use the 3.3V output pins, because the EPS8266 and ESP32 only have an operating voltage of 3.3V.

After we wire the KY-025 and the microcontroller, we can create the Arduino script that displays the analog and digital value of the reed switch. We go step by step over the program code and I explain what we are doing.

Now we print both value to the serial monitor and include a short delay of 0.1 seconds before we read the next sensor values in the next iteration of the loop function.

The following videos and picture show the results of this example, measuring the analog and digital values of the KY-025 reed switch.

On the left side, the video shows the analog value in the serial plotter of the Arduino IDE and on the right side you see a screenshot of the serial monitor where the digital values are changing analog to LED2. 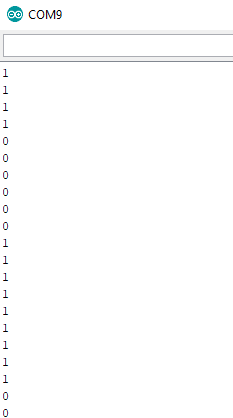 Read the Digital Values of the KY-021 Reed Switch

After the KY-025 we also want to test the KY-021 reed switch that has only a digital output and no build in LED. Therefor I use an external LED with a resistor of 220 ohm in series to visualize that the threshold is exceeded. The LED is connected to a digital pin and ground. Therefore we can use this digital pin to turn the LED on and off.

The following pictures show the wiring between the KY-021 and the Arduino, ESP8266 or ESP32 microcontroller boards. For the power supply you can either use the 5V output like I did for the Arduino boards or use the 3.3V output pins, because the EPS8266 and ESP32 only have an operating voltage of 3.3V.

Code to read the Digital Values of the KY-021 Module

Most of the program code that we use for the KY-021 reed switch is the same as for the KY-025. We only have to delete the parts for the analog connection and add the code that the external LED is turned on and off depending on the strength of the magnetic field.

The following section shows the Arduino code for the KY-021 that you can use with Arduino, ESP8266 or ESP32 microcontrollers.

In the setup function we also replace the analog pin with the led pin but because we want to control the LED with the microcontroller and therefore change the status of the digital I/O pin, the LED pin has to be defined as output and not as input. The rest of the setup function is the same like for the KY-025.

In the loop function, first we read the digital value with the digital read function on the previously defined digital pin. To control the LED we use a if function is the following manner:

At the end of the script we wait for 0.1 seconds and start to read the digital value again in the next iteration of the loop function.

Results reading the Digital Values of the KY-021 Module

The following video shows how the LED turns on when I get in the near of the KY-021 reed switch and turns off, when I move the magnet back.

This indicates that the digital value changes from LOW to HIGH.

In this tutorial we learned how a magnetic switch is used to build a security system for doors or windows for example. Moreover we used two different reed switches and showed in different examples the difference between the analog and digital operation mode.
If you have any further questions about reed switches, use the comment section below..

Also if you are interested in active switches, I also wrote a tutorial for these kind of switches where I also dive into the debouncing problem of switches and how to reduce the debouncing. Here is the link to the article.