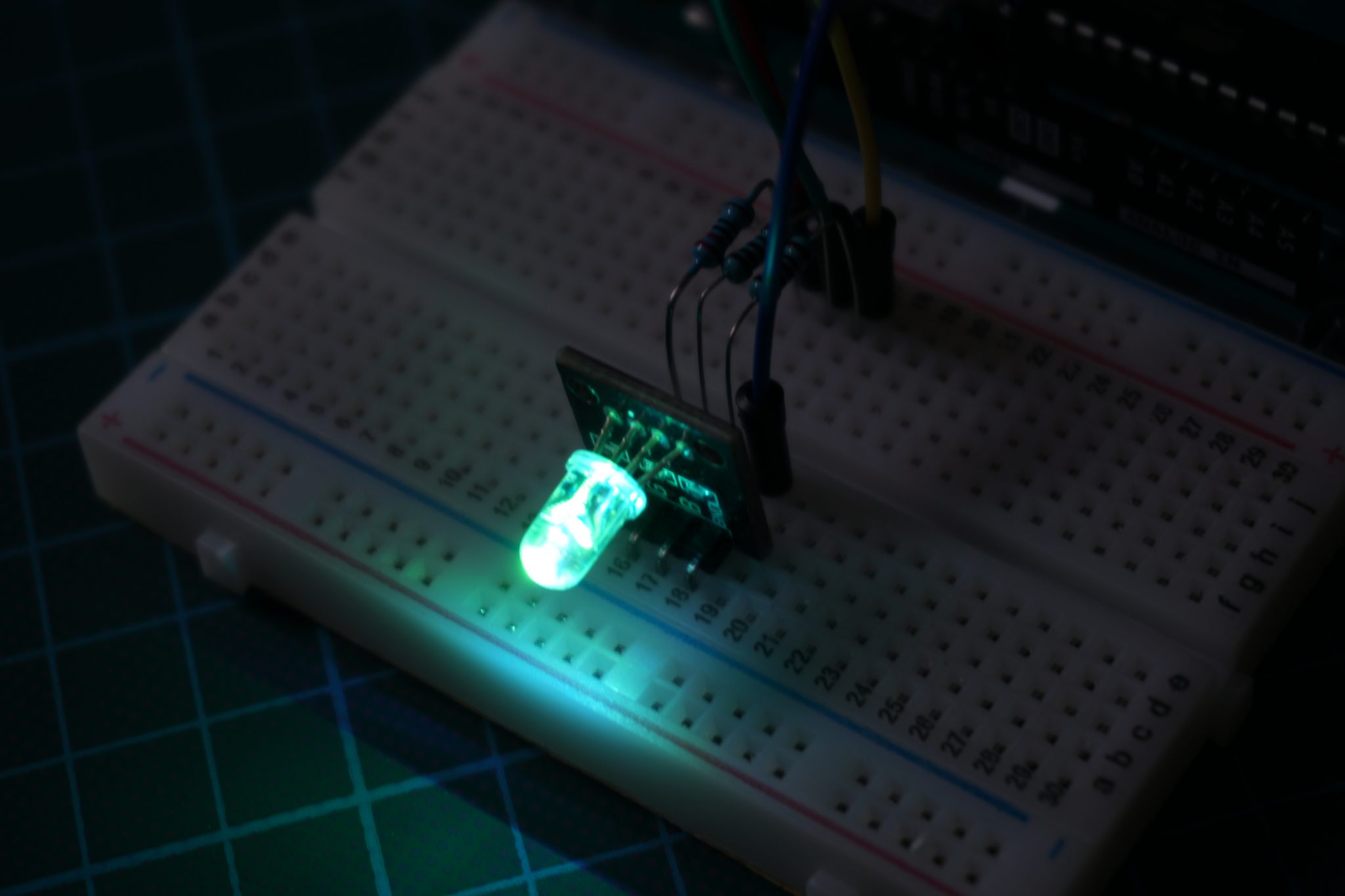 In this tutorial you learn how to control different LEDs with your Arduino, ESP8266 or ESP32 based micrcontroller.

The different LEDs give you total flexibility in your projects. Staring from a simple one color LED, to indicate the status of a system, to a multi-color LED that is used in gaming room setups.

Introduction to LED Tutorial for Arduino, ESP8266 and ESP32

In a lot of my blog posts I use some kind of LED to show what is going on in the sketch, for example when a certain sensor level is reached, a LED turns on. Because there are more lights and different kinds of LED available, we cover all these different devices in this tutorial. With this knowledge you can make your next project more special and awesome.

In this tutorial we often use a Pulse Width Modulation (PWM) signal to change the colors of the LEDs. If you do not know what PWM is, the PWM tutorial teaches you every thing you have to know about PMW. Make sure that you only use PWM pins if you need this functionality. For the ESP8266 and ESP32 based boards, all digital I/O pins are PWM ready. For the Arduino boards you find an overview of the different pinouts in the following articles: Arduino Nano, Arduino Uno, Arduino Mega or you take a look at the Microcontroller Datasheet eBook.

The following table gives you an overview of all components and parts that I use for this tutorial. I get commissions for purchases made through links in this table.

The Two-color LED (KY-011) module is a bi-color LED because the module emits red and green light. Using PWM you can adjust the amount of each color. Therefore the LED can be completely red or green and all combinations between depending on the inputs for the pins. This defines also the number of pins the KY-011 has:

The following table and pictures show the wiring between the Two-color LED KY-011 and the Arduino, ESP8266 or ESP32 microcontroller.

We want to make a short example sketch for the Two-color LED which alternates the color of the LED between red and green. Therefore we use PWM pins to loop between the green and the red color. It is also possible to only use the full red and green color if you want to make an example for a battery charging project.

In the setup function we define that the pins for the red and green LED should be outputs because we want to output an PWM signal from the microcontroller to change the color of the KY-011.

In the second for loop we invert the whole logic and the color of the LED goes back from red to green.

The following video shows the two color LED in action, changing the color from green over yellow to red and back. 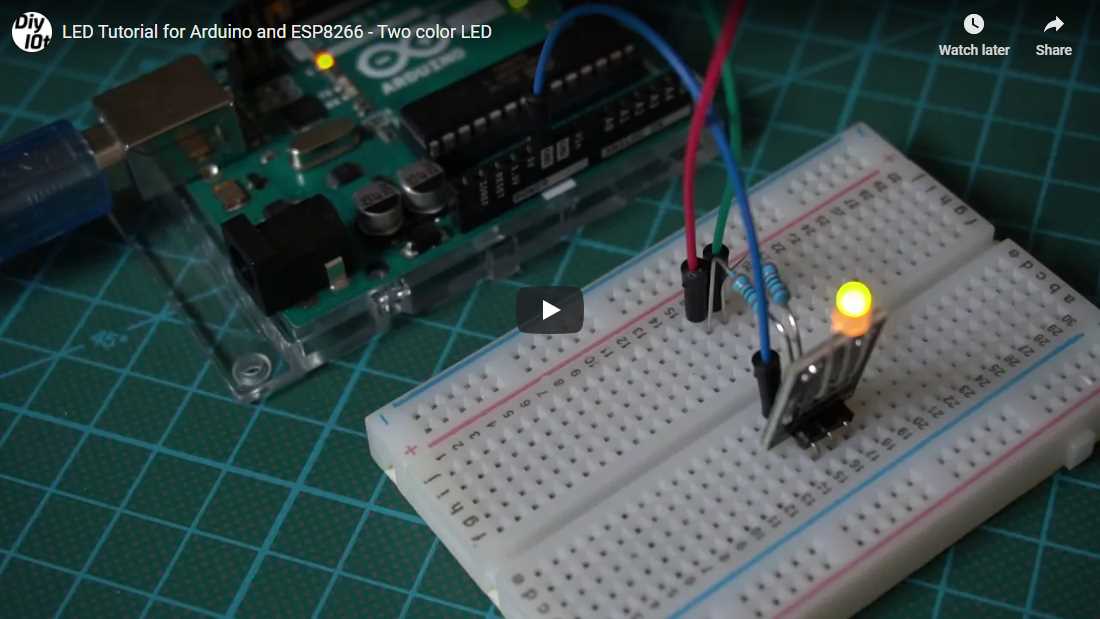 The SMD RGB (KY-009) is like the Two-color LED (KY-011) but is able to emit red, green and blue instead of only red and green. Therefor all RGB full colors can be emitted by the SMD RGB module due to the mix of red, green and blue. Like the Two-color LED (KY-011) also the SMD RGB (KY-009) use PWM to adjust the amount of each color. The module has 4 pins to connect to your microcontroller. The following pictures shows you how to connect the KY-011 to your Arduino, ESP8266 or ESP32 based microcontroller.

Important: The LED SMD Module consists of a 5050 SMD LED which has to prevent against burnout with limiting resistors. The following table shows you the operating voltage and the used resistors to prevent the burnout.

Code for SMD RGB (KY-009) to Cycle Through Various Colors

We want to make a short example sketch for the SMD RGB (KY-009) which cycle through various colors by changing the PWM value on each of the three primary colors. Based on this example script you can create unlimited variations. For example if you do not want to change one RGB color, you can define a static PWM value for this color outside the for loops.

You know most of the program script from the first example. Basically the script is like the first one, but instead of two LEDs, you to control tree LEDs.

Therefore we have to define the tree pins that connect the SMD RGB LED to the Arduino, ESP8266 or ESP32 microcontroller and define the blue LED as output in the setup function.

In the loop function, we mix the brightness of the different LEDs by changing the PWM values. This results in different colors.

The following video shows the result of the sketch. The SMD RGB LED is changing to different colors. 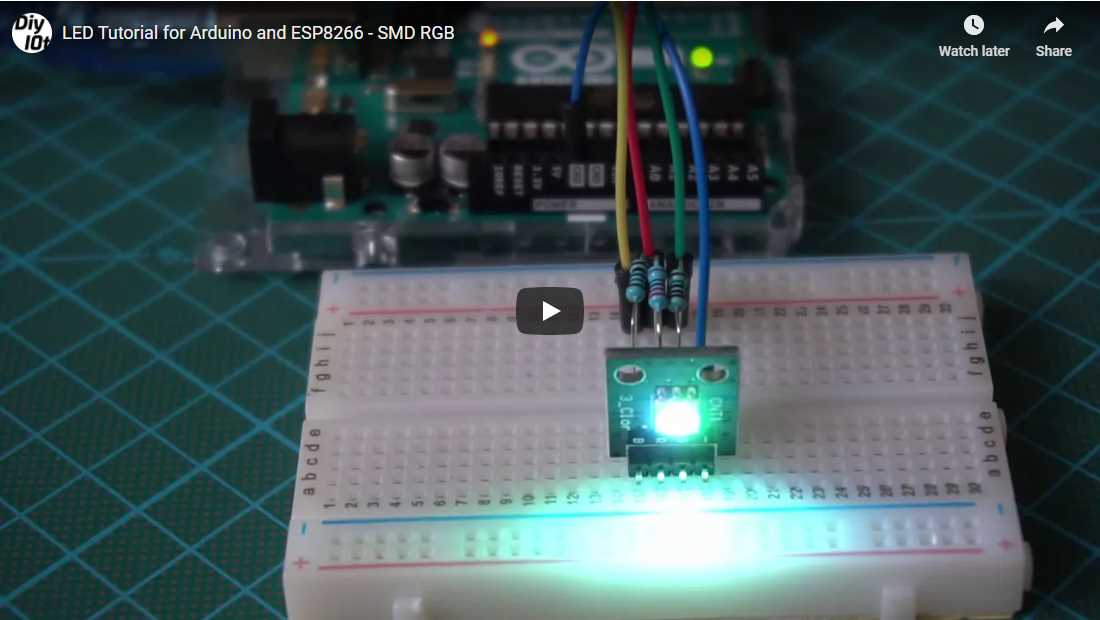 The RGB LED module is the same like the SMD RGB (KY-009). It only has a slightly different operating voltage, see the table below. But because the operating voltage differs only a little we use the same resistors to prevent the burnout of the module.

The following pictures show the wiring between the RGB LED (KY-016) and the different Arduino, ESP8266 or ESP32 microcontroller boards.

Code for RGB LED (KY-016) to Cycle Through Various Colors

For the RGB LED we use the same program code like for the SMD RGB (KY-009) which cycle through various colors by changing the PWM value on each of the three primary colors.

The following video shows how the color of the LED is changing during the program script. 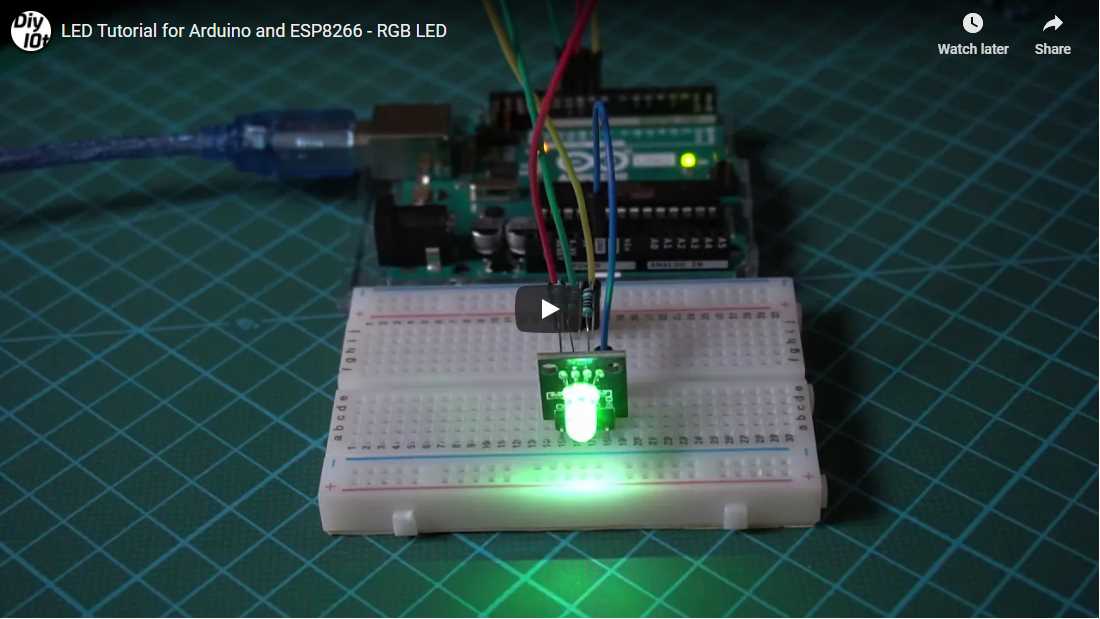 The 7 color flash LED changes its color every 2-3 seconds automatically and includes 7 colors in total. Because the logic of the changing colors is inside the LED module, we only need one digital I/O pin to turn on the logic of the LED and a standard circuit connected to 5V or 3.3V and ground.

The following pictures show the wiring between the 7 Color Flash LED (KY-034) and the Arduino, ESP8266 or ESP32 microcontroller.

In the following example we turn on the LED for 20 seconds and then start the program all over again.

Like in all other scripts, at the beginning we have to define the pin that connect the 7 color flash LED with the Arduino, EPS8266 or ESP32 micrcontroller. You only need the one line of code that matches to your microcontroller.

In the setup function we define the LED pin as output.

In the loop function, we turn on the logic of the 7 color flash LED by set the digital pin HIGH. After a delay of 20 seconds, we start the program all over again.

The following video shows the 7 color flash LED KY-034 in action. In my opinion this LED is the coolest of all in the article. 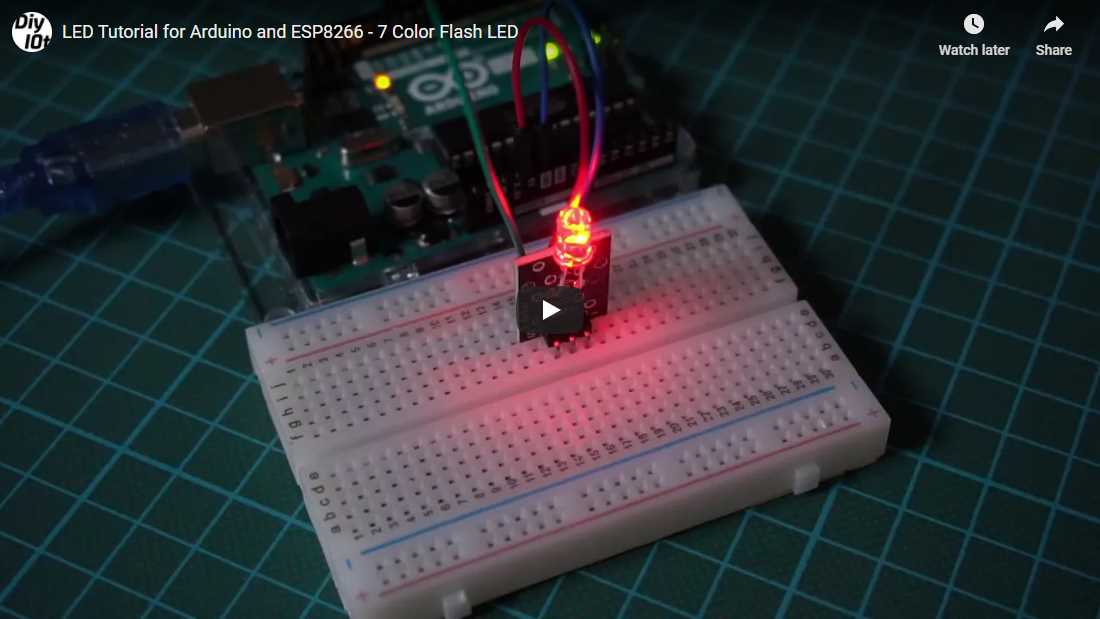 How to Use the Light Blocking (KY-010) Module

The KY-010 photo interrupter module consists of an optical emitter/detector in the front and two resistors (1kΩ and 33Ω) in the back. The sensor uses a beam of light between the emitter and the detector to check if the path between both is being blocked by an opaque object.
The operation voltage is between 3.3V and 5V, therefore no resistor in series is needed to prevent burnout.

Code for KY-010 to Detect if Sensor Beam is Blocked

In the first part of the Arduino script we define the pins that are connected to the LED and the light blocking module. The script can be used for Arduino, ESP8266 or ESP32 microcontrollers. You simply have to comment the lines that do not match to your microcontroller.

In the setup function we define the LED pin as output and the pin for the light blocking module as input.

The loop function starts with reading the digital state of the light blocking sensor. If the sensor value is 1 it equals to that  the light is blocked, we turn on the LED by setting the digital output value of the LED pin HIGH. In all other cases we set the LED pin LOW so that the LED is off.

The following video shows that the LED is turned on when I block the light of the light blocking module with a wire. 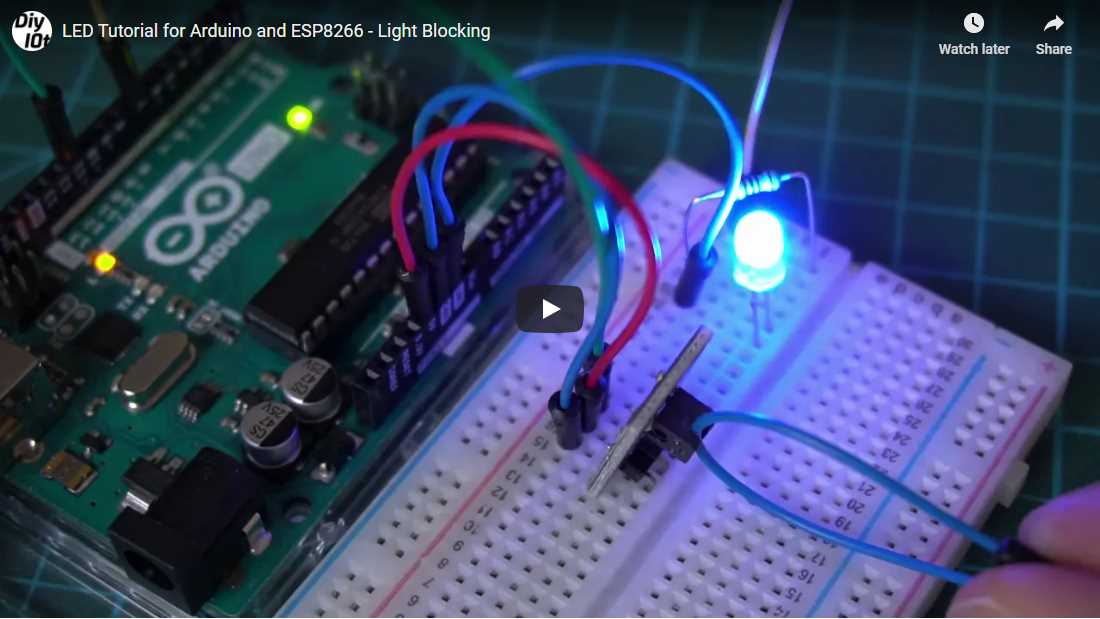 I hope that you now know the differences between the different LED modules that are available on the market. Because there are some major differences, you should know what LED fits your project right. If you have any questions about this article, please the use comment section below to ask some questions. And I would be really happe if you share this article with your friends.