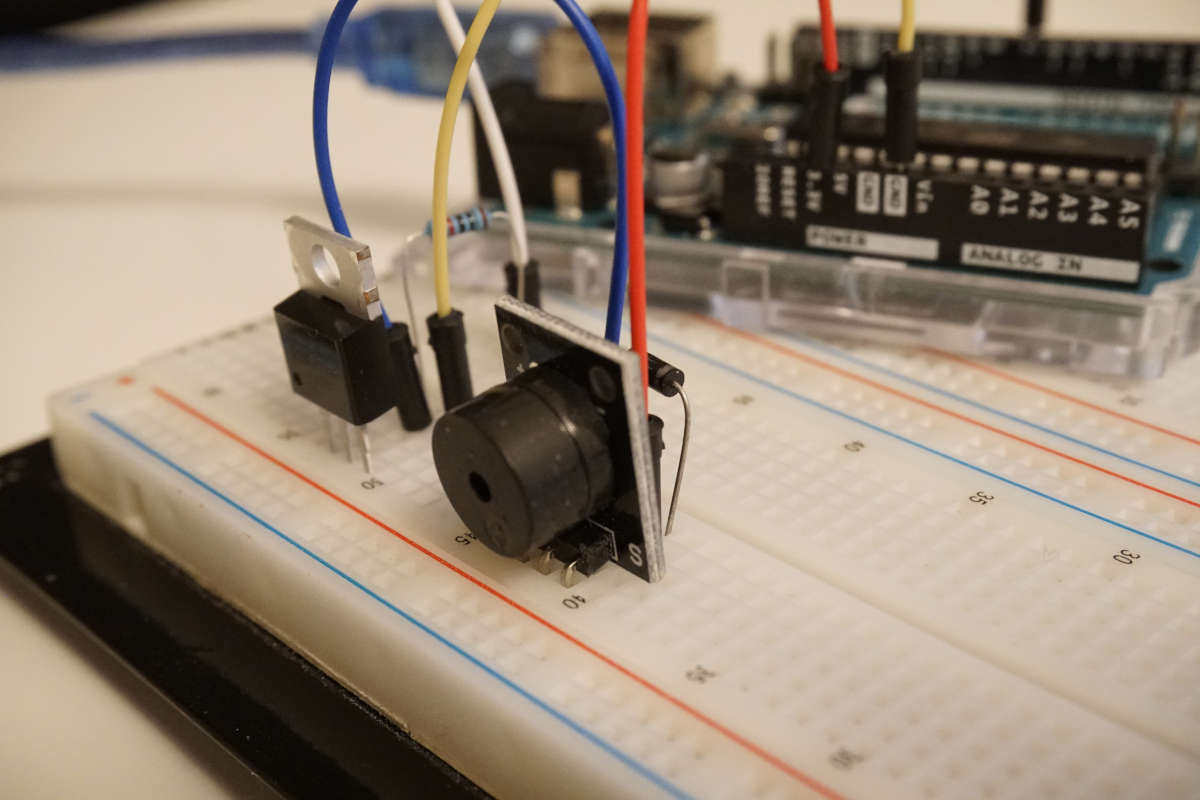 Active and Passive Buzzer for Arduino, ESP8266 and ESP32

In this tutorial you learn how active and passive buzzer work and the differences between both buzzers.

After we create a full circuit along with a NPN MOSFET and flyback diode and Arduino, ESP8266 or ESP32 microcontroller, we program a sound example for the active buzzer and a melody example for the passive buzzer.

Overview of Different Types of Buzzers

There are different types of buzzer that can be differentiated by two key factors:

With these independent factors, there are in total four different combinations of buzzers that are shown in the following picture. 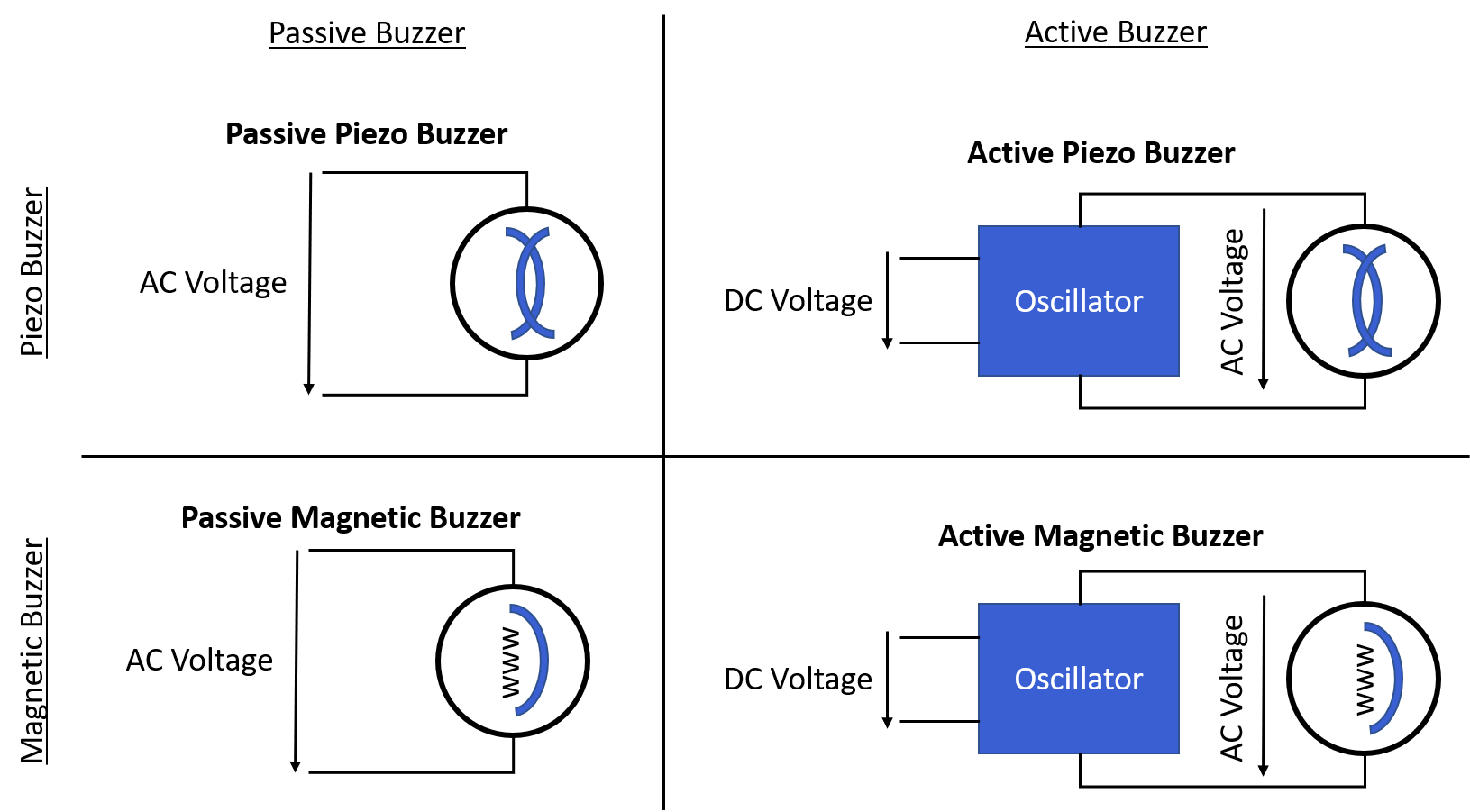 In the following sections we dive deeper into the different types of buzzers.

Difference Between Passive and Active Buzzer

Schematic and Functionality of Passive Buzzer 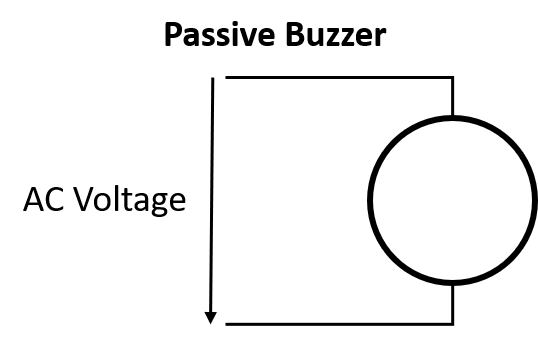 Because you have full control over the AC voltage signal, you can control the pitch and create different tones which we see in the passive buzzer sound example.

How can an AC signal with Arduino, ESP8266 or ESP32 microcontroller? We use the Arduino tone function that generates a square wave of the specified frequency (and 50% duty cycle) on a digital I/O pin.

Schematic and Functionality of Active Buzzer

The active buzzer generates a tone using an internal oscillator, that creates an alternating voltage signal for the buzzer based on the external DC voltage. Because the oscillator can not be changed, the active buzzer can only play a single tone with a predefined frequency of 2300 Hz +- 300 Hz when a constant DC voltage is provided.

Instead of a constant DC signal, you can also create some variety of tones by applying an oscillating signal to the active buzzer. Compared to the passive buzzer, the tones that can be created is very limited and not quite as clean.

The main advantage of the active buzzer is that no processing power, hardware timers, or additional code is needed to produce a sound and therefore mostly used in security, air conditioning, refrigerator, printer, automotive electronics electronic products.

Difference Between Piezo and Magnetic Buzzer

Buzzers can also be categorized by the functionality that generates the tone. The two most used types for microcontroller are the piezo buzzer and the magnetic buzzer. The following table shows the main differences between a piezo and a magnetc buzzer.

In the following two sections we take a closer look at the construction and the functionality of the piezo and the magnetc buzzer.

Construction and Functionality of Piezo Buzzer

Piezo buzzers are designed to be used for larger voltages, normally between 12V and 220V with a current consumption of under 20mA. Because of the higher voltages, the piezo buzzer has typically a greater maximum sound pressure level (SPL) between 85db and 120db than magnetic buzzers.

A piezo element responds to voltage at any frequency, but much more strongly at its mechanical resonant frequency between 2 kHz and 6 kHz.

The following picture shows the construction of a piezo buzzer.

The sound source of the piezo buzzer is the piezoelectric diaphragm that consists of two key components that:

When there is no DC voltage supplied to the piezo buzzer, the buzzer does not make any sound and the piezoelectric ceramic plate as well as the metal plate are in their neutral position.

Therefore, when an AC voltage is applied to the piezo buzzer, the bending is repeated, producing sound waves in the air.

Construction and Functionality of Magnetic Buzzer

Compared to the piezo buzzer, the magnetic buzzer operates at lower voltages between 1.5V and 12V but needs higher current of greater 20mA.

Also the magnetic buzzer responds much more strongly at its mechanical resonant frequency between 1 kHz and 3 kHz. The Maximum Sound Pressure Level (SPL) is between 70db…95db and therefore lower compared to the piezo buzzer.

The following picture shows the construction of a magnetic buzzer.

The flexible ferromagnetic disk is connected to the enclosure of the buzzer and attracted to to coil when a magnetic field is present. If an AC voltage is applied, the ferromagnetic disk moves back and forth and creates a tone in similar manner to how a tone is created by a speaker.

The magnetic field, that is the source of the tone is created by the current that is determined by the applied voltage and the impedance of the coil. Therefore the magnetic buzzer is a current driven device.

In the following sections we describe the circuit and the electronic components in detail to understand the functionality of the circuit. 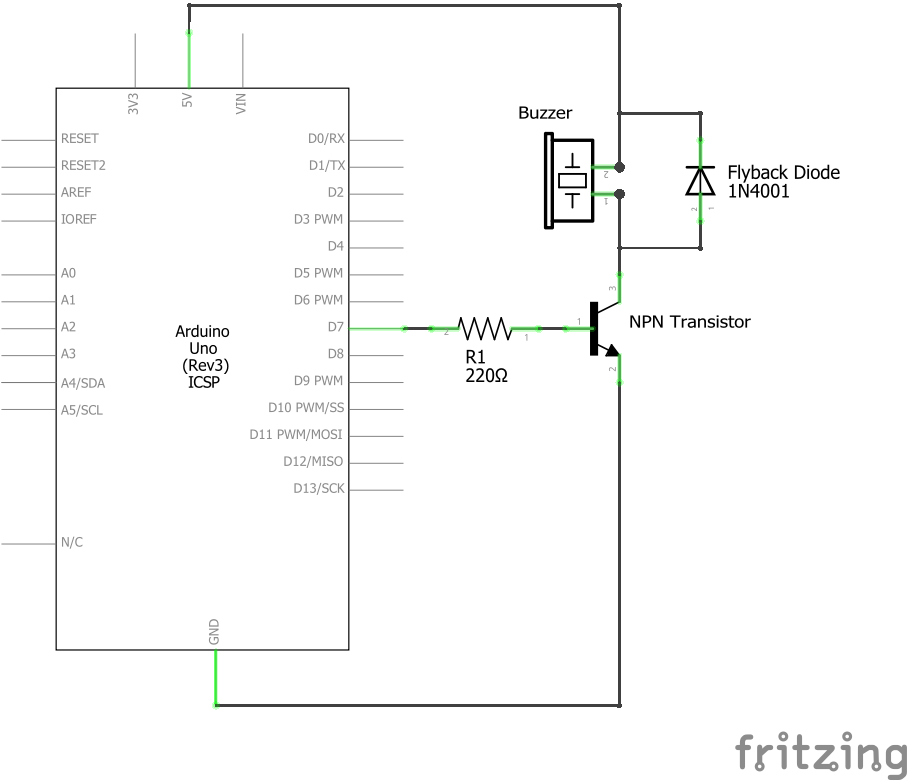 Why do we use a Transistor to control the buzzer?

When we create the circuit to control an active or passive buzzer with an Arduino, ESP8266 or ESP32 microcontroller, we have to keep in mind that the maximum current of the digital I/O pins of the microcontroller is limited. If the buzzer consumes more current than the maximum current of the digital pin is able to provide we need another solution.

The following table shows the maximum current of the digital input/output pins of the most used microcontroller boards. This information is also included in my Microcontroller Datasheet eBook.

The solution is to use a transistor and divide between the control signal and the power consumption. In my case I use the IRLZ44 NPN MOSFET as low-side transistor to control the buzzer.

For the wiring, make sure to know the positions of the gate, source and drain of your MOSFET that you are using. For example: In the fritzing sketch of the wiring, the gate is in the middle but for the IRLZ44, the gate is the left pin.

Why do we need a diode in parallel to the Buzzer?

If the buzzer is switched off, the vibration of the piezo and magnetic buzzer can lead to voltage spikes because:

The diode, also called flyback diode, that we set in parallel to the active or passive buzzer provides a safe path for the inductive current so that the voltage does not rise and damages the circuit.

Difference between a Buzzer and a Buzzer Module

If you want to build your own current, you have to know if you have a standard buzzer in front of you or a buzzer module. The difference between a buzzer and a buzzer module is quite simple. A buzzer is only the buzzer itself and the buzzer module contains also the transistor, the resistor and dependent on the module also a power LED. The following two pictures show clearly the difference. 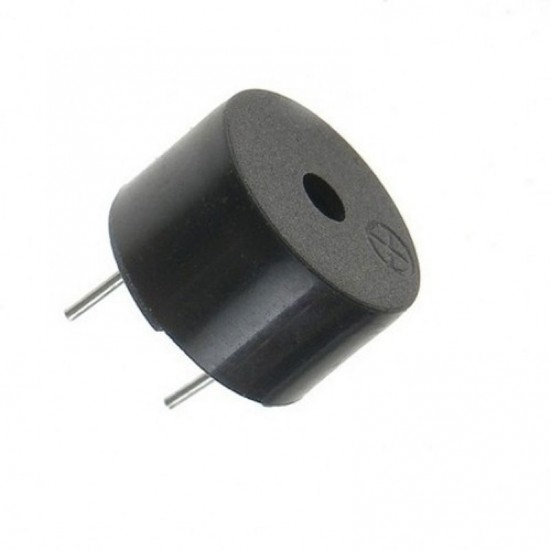 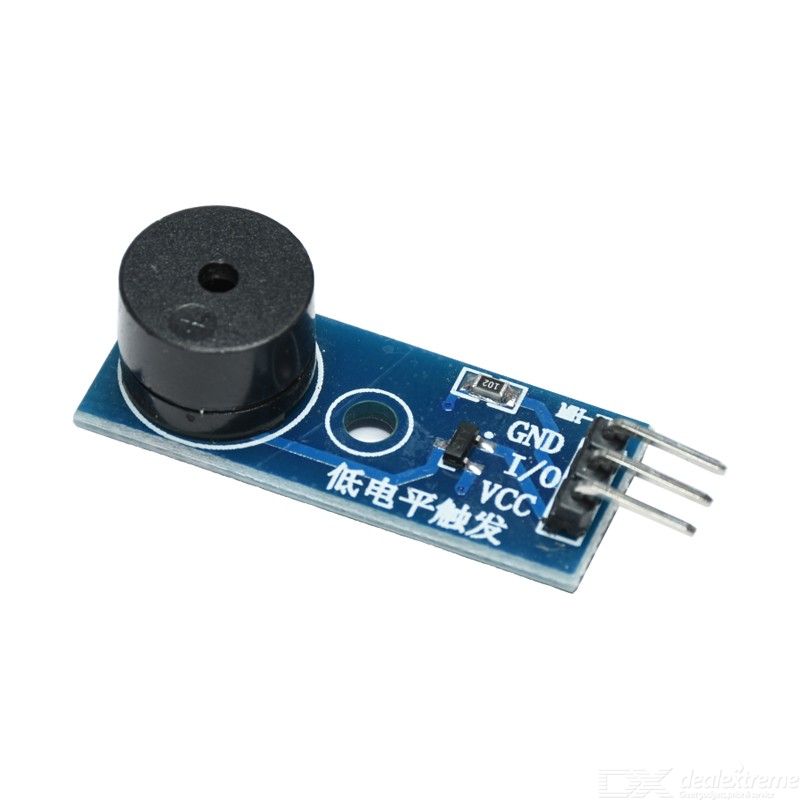 If you have a buzzer module, the wiring between the module and the Arduino, EPS8266 or ESP32 microcontroller board is very easy. You only have to connect the power supply, ground and the digital I/O pin to the module and you are ready to go.

Wiring between Buzzer and Arduino Boards

Wiring between Buzzer and ESP8266 Boards

The wiring between the active or passive buzzer and the ESP8266 NodeMCU or ESP8266 WeMos D1 Mini is shown in the following pictures. If your favorite ESP8266 microcontroller boards is missing and you need the wiring for this board, use the comment section below and I will add this board to the tutorial.

Wiring between Buzzer and ESP32 Boards

The following picture shows the wiring between the active or passive buzzer and the ESP32 ESP-WROOM-32. If your favorite ESP32 microcontroller boards is missing and you need the wiring for this board, use the comment section below and I will add this board to the tutorial. 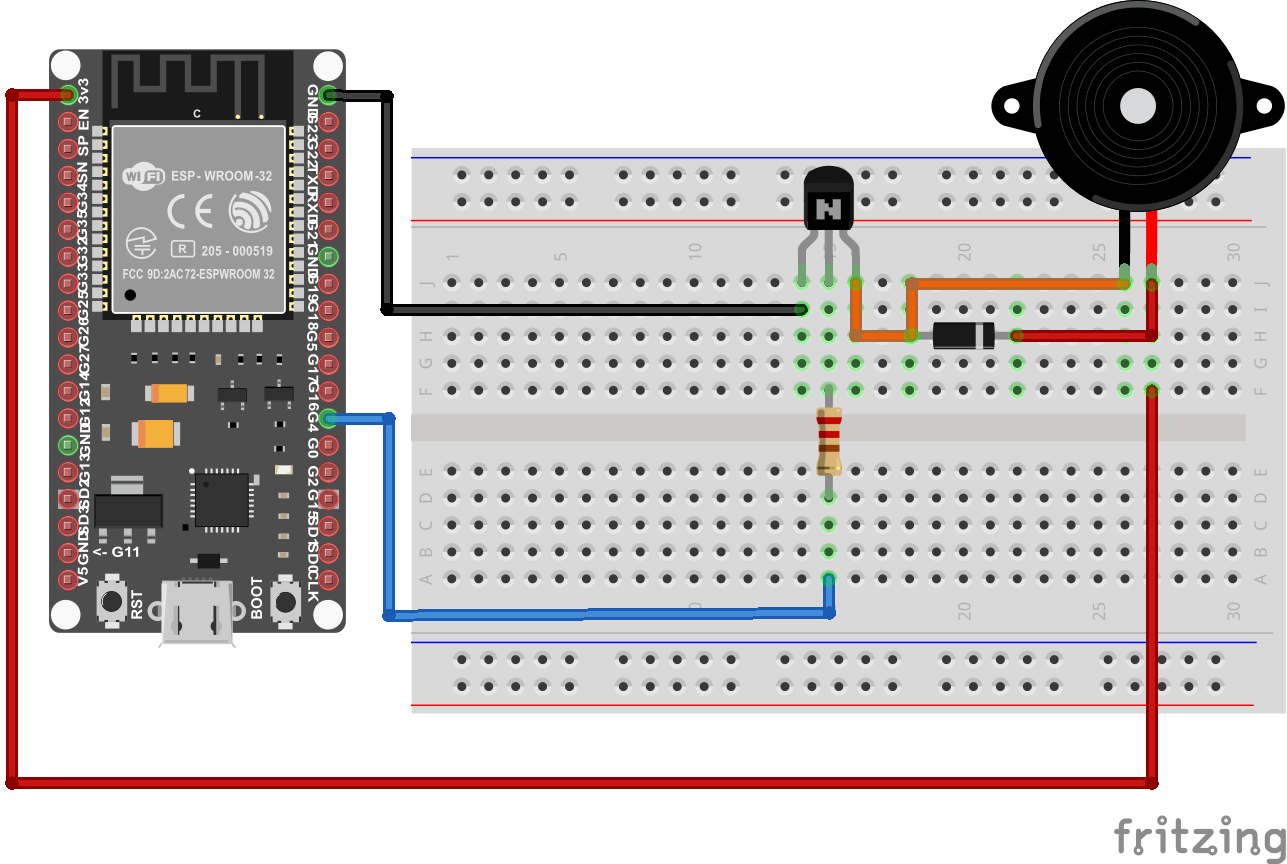 Creating a Sound with an Active Buzzer

The following section shows the Arduino program code for Arduino, ESP8266 and ESP32 microcontroller. Depending on the commented first three lines, the script can be used for all of these microcontrollers.

The first three lines define the digital I/O pin that is connected to the gate of the MOSFET with a resistor in series. Uncomment the line of code for your microcontroller and comment or delete the other two lines.

In the setup function we define that the digital pin that we defined is an output because we want to control the buzzer and do not read any digital signal.

The loop function starts by setting the digital pin HIGH to turn on the active buzzer by activating the switch function of the MOSFET. After a delay of 1 second, we turn of the voltage on the gate by setting the digital pin LOW. Therefore the MOSFET blocks the current for the buzzer and the buzzer turns off. We wait for one second and the loop function starts again.

The following video shows the program code for the active buzzer in action. Note that I use a buzzer module and therefore no other electronic parts like the MOSFET or diode is needed.

Creating a Melody with a Passive Buzzer

The passive buzzer has the advantage that we can not only create a tone, but also a melody with different frequencies. Let me know in the comment section if you know the melody that we create in this example.

To create a melody the passive buzzer needs an AC signal where we can define the frequency. Therefore we can not use the analog write function, because this function has a fixed frequency of 500Hz.

Instead we use the Arduino tone function to generate a square wave of the specified frequency (and 50% duty cycle). You could now use the tone function and define the connected output pin, the frequency and the duration of the output generation, but if you do not know the frequency of different notes, we can also use the pitches library from Mike Putnam. 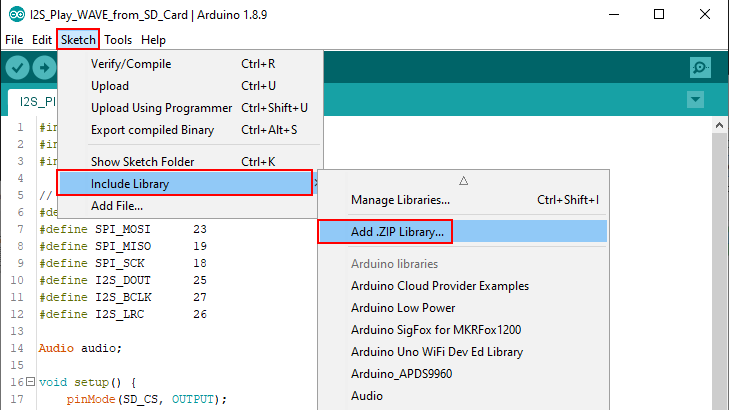 Now select the downloaded ZIP file from Github with the pitches library inside and you are ready to go.

The following section shows the program code that I created for the passive buzzer.

At the beginning of the Arduino script we include the pitches library and define the digital I/O pin that is connected to the gate of the MOSFET. Because the code can be used for Arduino, ESP8266 and ESP32 microcontroller boards, you have to uncomment the line of code for your microcontroller and delete or comment the other two lines.

To create the sounds via the tone function we create a helper function called beep that has the note and the duration for the tone as arguments. We use the tone function on the digital pin with the note of the pitches library and play the tone for the defined duration. After we the sound, we wait for the same time without any tone.

In the setup function we define that the digital pin that we defined is an output because we want to control the buzzer and do not read any digital signal.

In the loop function, we create the melody by using the beep function with the note we want to play and the duration of the sound. Using multiple sound and delays create a melody that you know.

The following video shows the melody example with a passive buzzer in action. Note that I use a buzzer module and therefore no other electronic parts like the MOSFET or diode is needed.

You can also try to use the same wiring and program code for the active buzzer. It will work but you will notice that the melody is not as clean compared to the passive buzzer.

If you have any questions, regarding the active or passive buzzer, use the comment section below to ask you questions and I will answer then as soon as possible.

1 thought on “Active and Passive Buzzer for Arduino, ESP8266 and ESP32”