Temperature and Humidity Sensor Tutorial for Arduino and ESP8266

In this tutorial your will learn everything you need to know about the temperature and humidity sensors:

After this tutorial you know the differences between sensor and module.

Moreover you can copy all sketches for your own projects.

I use the following parts for this tutorial

If you connect the LM35 with an Arduino digital input pin, the internal Arduino analog-to-digital conversation (ADC) converts the analog voltage to a digital value between 0 and 1023.

Can you also use the maximum ADC voltage of 1.1V in this case? The answer is yes, but you will restrict the value range of the temperature sensor. The maximum output voltage changes from 2.05V to 1.1V and we know that the scale factor of the sensor is 10mV/°C. Therefore the maximum temperature with a ADC voltage set to 1.1V is 1.1V/10mV/°C=110°C. The temperature range changes to 0°C…110°C which is for indoor use chases a good and the most precise solution.

You have to use an analog pin on your microcontroller board to read the analog value of the one wire temperature sensor. If you have an Arduino, you will not have any problem because the Arduino boards have quite some analog input pins. But if you have a NodeNCU with only one analog input pin, you may have a problem when this one pin is already in use and you do not want to use an analog multiplexer.

If you want to know how to use an analog multiplexer in combination with your NodeMCU to read multiple analog values, look at this article.

You find the datasheet from the used LM35 temperature sensor from Texas Instruments here.

The wiring is pretty easy and straightforward. If the flat side of the LM35 one wire temperature sensor is looking up to you, the left bin is the power pin you connect to the Arduino 5V pin. The right pin is ground, therefore connect the right pin to GND. And the middle pin is the data pin you can connect to every analog input pin. I connected the data pin to A0 on the Arduino Uno 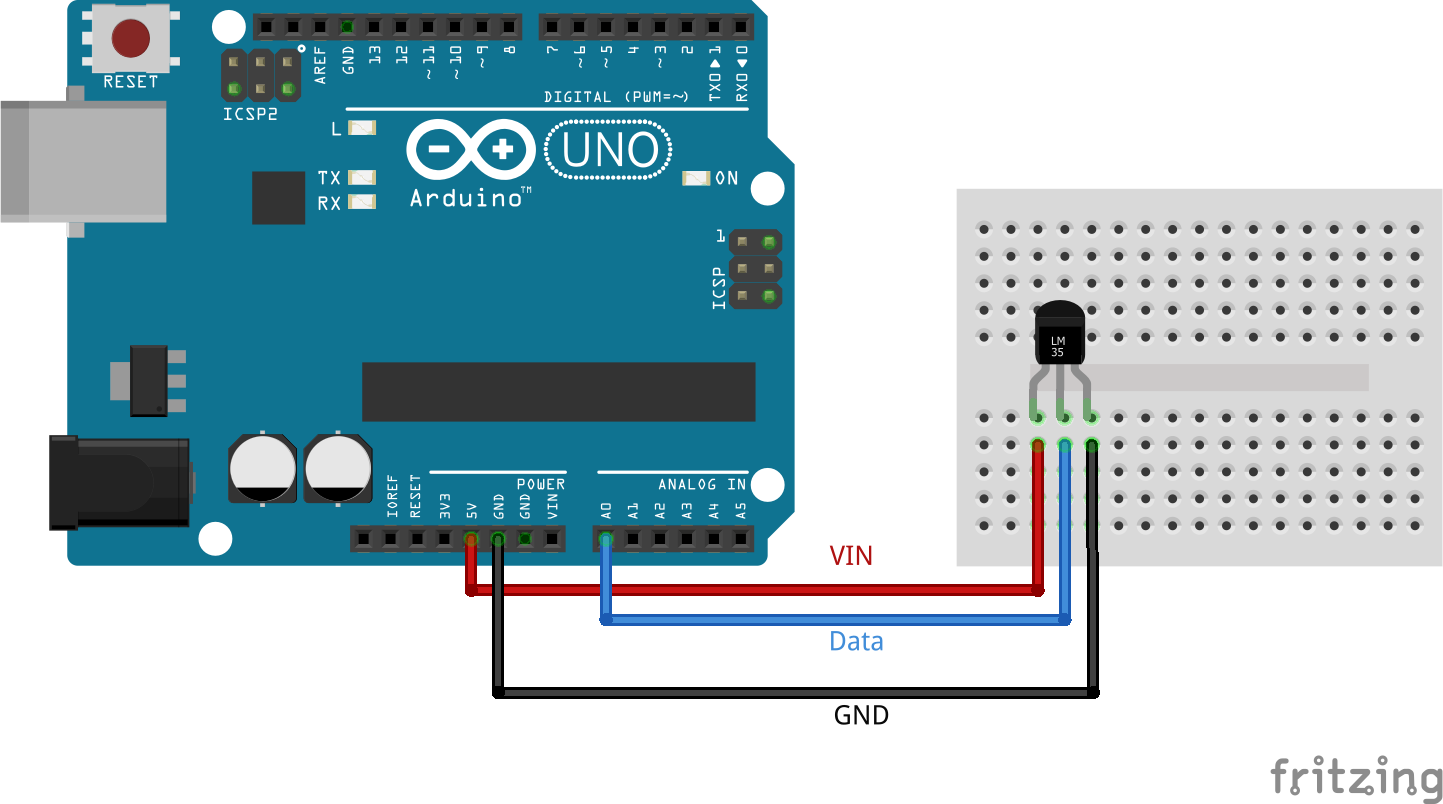 If you want to know what the function of a pull-up resistor is, than read this article.

The DHT sensors measure the temperature with a surface mounted NTC temperature sensor (thermistor). If you want to know how a thermistor works, here is an extra article about thermistors. Humidity is measured by the change in resistance between two electrodes and a moisture holding substrate between the two electrodes.

The following picture show how to connect a DHT11 or DHT22 temperature and humidity sensor to your Arduino and NodeMCU. One picture for the version with the up resistor and one version without the pull-up resistor on the PCB, where you have to add the resistor yourself. 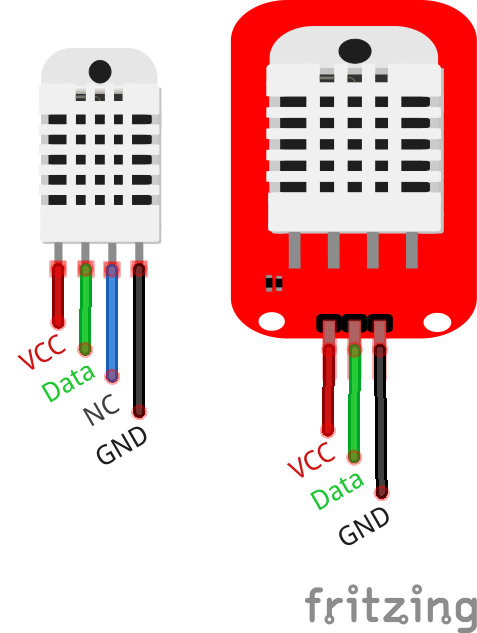 To use the DHT11 or DHT22 sensor in your sketch, you have to download the library of the sensors. The corresponding library is called: “DHT.h”

You find here an article how to install an external library via the Arduino IDE.

After you installed the library successful you can include the library via: #include . This will call the external library and take care of your sketch. The following sketch will read the temperature and humidity of a DHT11 sensor, DHT22 sensor and DHT22 module every 10 second and print the value to the serial output. 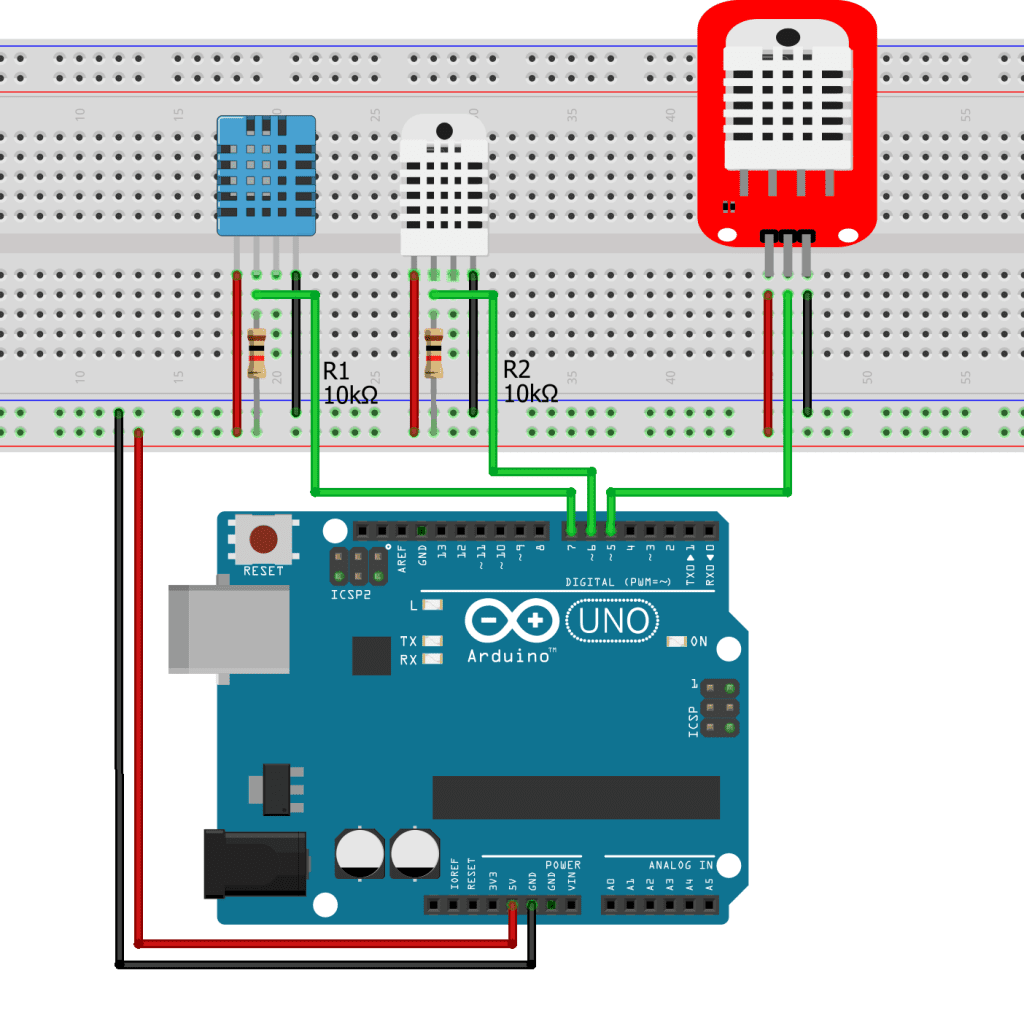 The following picture shows the serial output of the script. You see that the humidity sensor of my DHT11 sensor is broken. The differences in the humidity (~2%) and temperature (~1.5*C) are within the normal range. 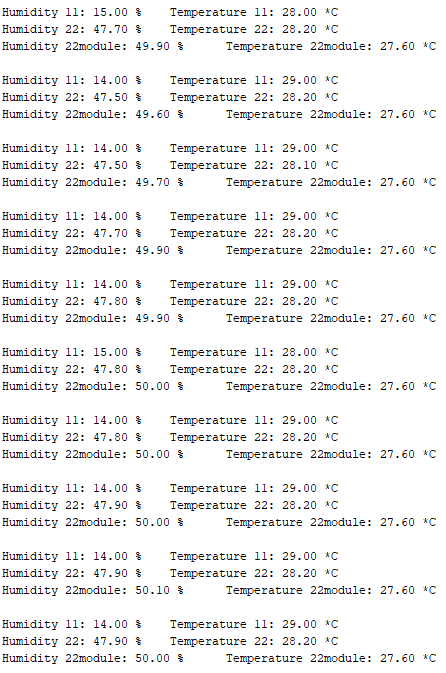 How to choose the right temperature and humidity sensor?

The following table give you an overview about the specifications of the temperature and humidity sensors. I would always chose the DHT22 sensor because in every project I want to know the temperature I also want to the humidity. Moreover the temperature range and the accuracy are ways better than the DHT11 sensor.

Do you have any further questions about temperature and humidity sensors? Use the comment section below to ask your questions.