In this article you learn what MQTT is and how this message protocol works.

This tutorial covers the following parts: 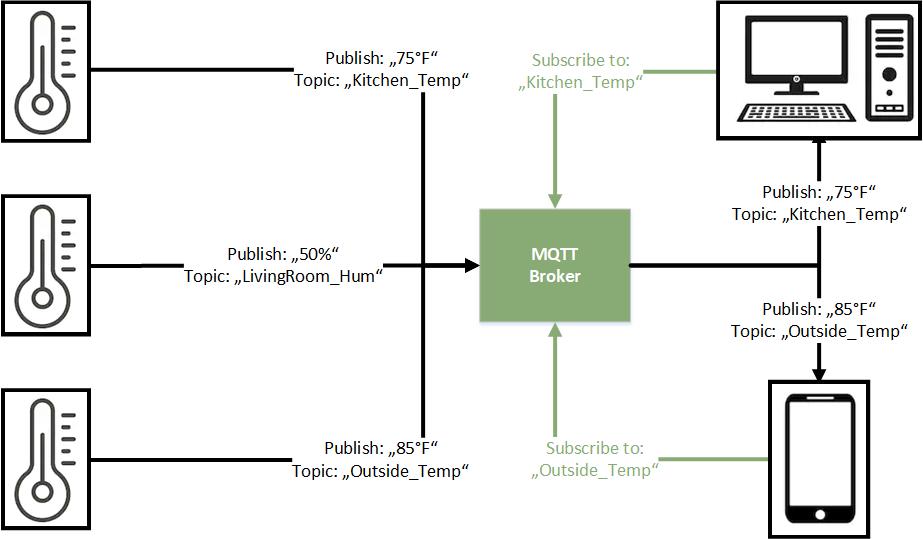 MQTT stand for Message Queuing Telemetry Transport and was invented by Andy Stanford-Clark of IBM and Arlen Nipper of Cirrus Link in 1999. Over the last years the “internet of thinks (IoT) became very popular. The core component of the IoT is the communication and interaction of different physical devices directly or over the internet. Therefore a machine to machine (M2M) communication protocol is needed. That is what MQTT is. MQTT is a light messaging transport protocol based on publish/subscribe messaging and works on top of TCP/IP.

Therefore the protocol is suitable for microcontrollers like the Arduino, ESP8266, ESP32 or Raspberry Pi. I personal use MQTT for sending data from my weather stations, build with an NodeMCU, to my Raspberry Pi which is the central control unit for my smart home. If you are interested in the practical example of the MQTT connection, read the microcontroller to Raspberry Pi WiFi MQTT communication article.

MQTT- How it works

As mentioned MQTT base on a publish and subscribe pattern. Therefore a message broker, often called server, is needed to manage the connection between the publisher and the subscriber. There is no limitation that only one broker can interact in the network. Publisher and subscriber are also called clients.

Information are organized in a hierarchy of topics. This means that every information has a

In total there are 3 different parts which interact differently in an MQTT interaction:

If a Client re-sends a particular Control Packet, then it MUST use the same Packet Identifier in subsequent re-sends of that packet.

Some MQTT Control Packets contain a payload as the final part of the packet. In the case of the PUBLISH packet this is the Application Message. The following table show the Control Packets that contain a Payload.

If you are interested in the full message format description, you find the whole specification here.

Like in every other connection between different devices the level security you need is depended on your use case. From my side I would recommend a basic level of security because the effort you have to do is nearly zero. Our objective is to protect the data, which is transferred between publisher, broker and subscriber.

The MQTT protocol defines that the security mechanisms are initiated by broker and applied by the clients. In total there are 3 ways to verify the identity of a client by the broker.

Identify a client via the client ID

The qualification of the identification via client ID is, that every MQTT client has to provide a client id. When a client subscribes to a topic or different topics, the client ID is linked to the topic and to the TCP connection. Due to persistent connection, the broker remembers the client ID and the corresponding subscribed topic.

The downside is that the transmission of the username and password is not secured without an additional transport encryption like SSL for example. An additional benefit for this security mechanisms is, that the username can also be used as authentication of accessing topics.

There is also the possibility of accessing the server as anonymous client. Therefore there are multiple options if an access is restricted by the broker depending on the anonymous access option and the username and password file. The following tables shows all combination and if the access is restricted or not.

There is also the possibility of security by certificates. This is the most secured method of client authentication but also the most difficult because of certificate management.

There are two main cryptographic protocols which you can use to secure your MQTT connection: