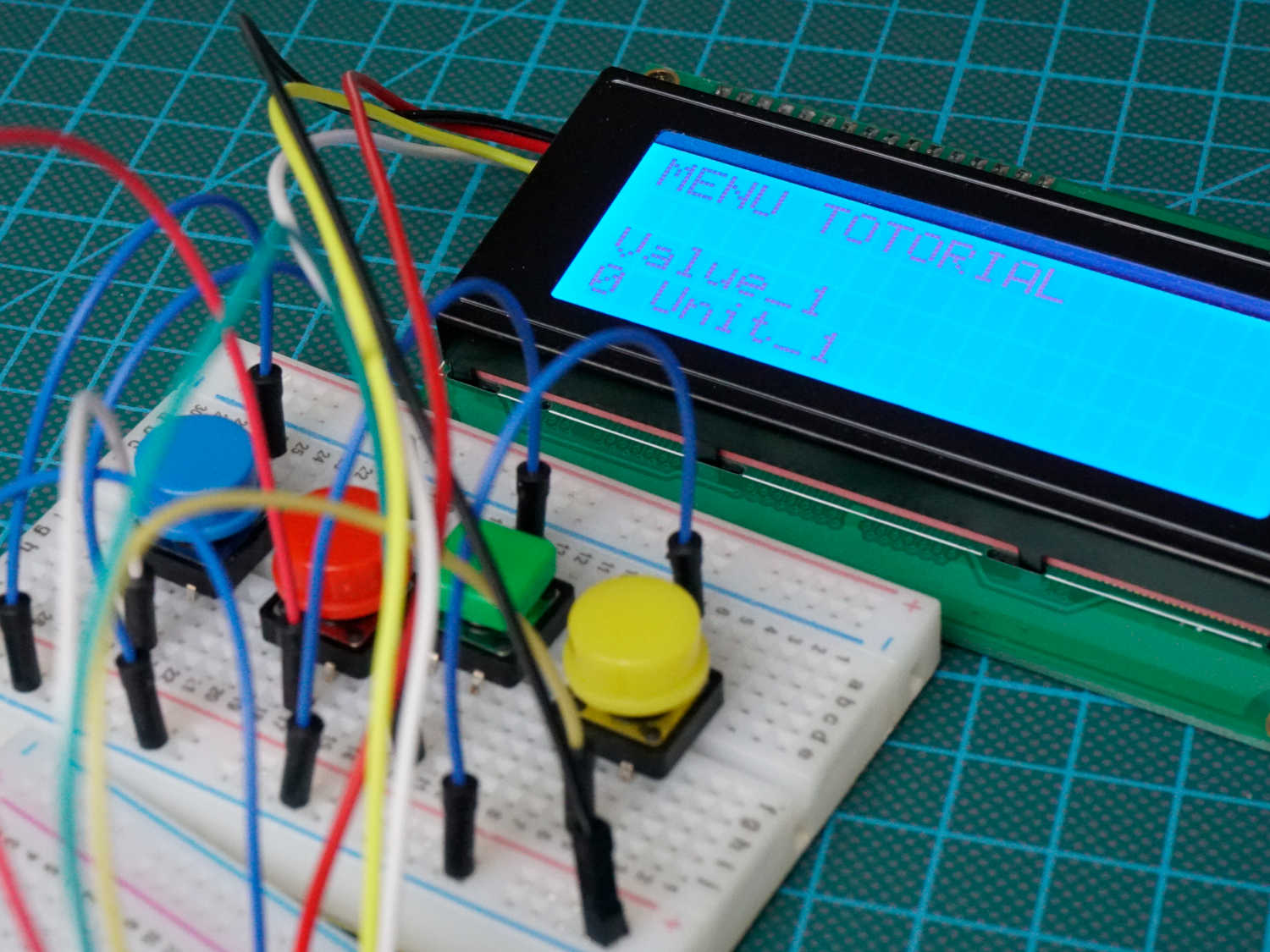 Building a Menu with Buttons for your Microcontroller

In this tutorial we build a menu with in total 4 buttons and 1 LCD screen for your Arduino, ESP8266 or ESP32 microcontroller to control a running program.

The article is divided into two parts:

How to Build a Menu with Buttons for a Microcontroller

You can transfer my example also in the smart home area. For example you can also have a menu to display the temperature and humidity for different rooms in your house, each screen on the display showing the stats for one room. And if the humidity exceeds a predefined threshold, which can be set with the menu, you get an alarm on your phone.

In this tutorial we use a menu with 4 buttons: 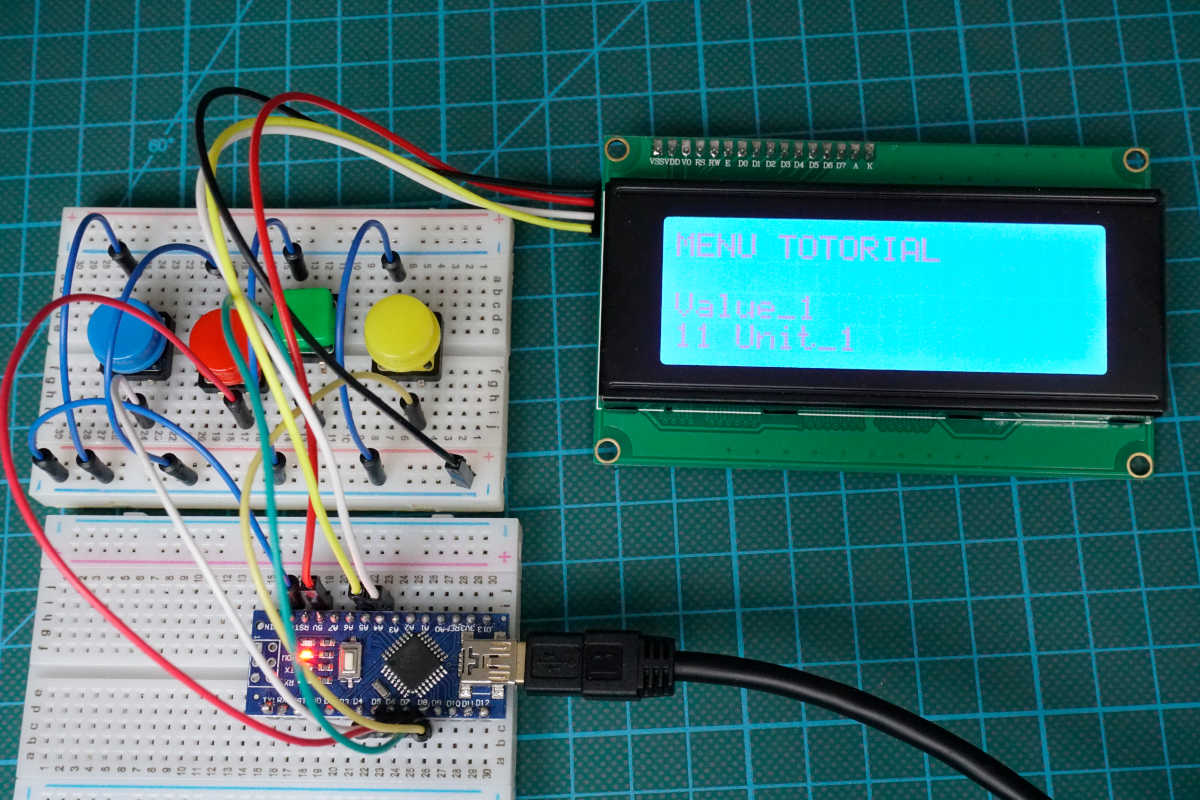 Wiring between Buttons and Microcontroller to create a Menu

For this project I use different Arduino boards. But you can use whatever microcontroller you want, like the ESP8266 or ESP32. The following fritzing sketch shows the connection between the Arduino boards, the 4 buttons and the LCD screen.

I use a 20×4 LCD display with L2C communication. If you are also interested in LCD displays in general, I recommend you to look at my LCD display tutorial.

The LCD display is connected via the I2C interface to the Arduino boards for the communication and data transmission between microcontroller and LCD display. We use the 5V pin for the power supply of the display.

The four different buttons are connected to a digital pin of the Arduino board. In my case I use digital I/O pins 5…8 for the connection. If you use other digital pins, make sure to change the program code as well.

Now lets dive into the Arduino program. This script is a little bit more complicated because the difficult part is not the connection between display, buttons and microcontroller but in the script to create the logic of the menu. But do not panic, we go step by step through the script and I describe every little detail.

First we import the necessary library for the I2C LCD display communication and create and LiquidCrystal_I2C object. The object has in total three variables:

If you are not sure how to install the LiquidCrystal_I2C library, you find a step by step tutorial in this article.

Now we define in total 4 different variables with the pin number to know on what signal the different buttons send their state to the Arduino. For example the down button is connected to pin 6.

The buttonState variables store the current state of the button. At the beginning of the script the buttons have the state 0. If a button is pressed it gets the state 1. With this state we know later in the script which button was pressed and can trigger the reaction.

After we care about the buttons, we come to the screens. The first variable defines the number of screens we want to show. In this case we want to create 4 screens. The second variable defines the screen which is shown at the start of the program. We define the screen 0. And here comes the first obstacle, because we now we create a two-dimensional array. In each of the 4 screens we want to save 2 variables. The 2 variables are a value and a unit and could be temperature and kelvin. The variable of the current screen is 0 because we access the first element of an array in Arduino with 0 and not 1.

The last variable we declare is an array which stores the current value of the screen. Because we have in total 4 screens, we store 4 values which can be increased or decreased.

After all variables are defined we take care about the setup function which will only run once at the start of the microcontroller. First we define the baud rate to 9600 which means that we can see values in the serial monitor with a data rate of 9600 bits per second. The baud rate defined in the setup function and in the serial monitor has so be synchronous.
After setting the baud rate we initialize the LCD display and turn the backlight on.
Then we initialize the 4 buttons with their pins and we enable the internal pull-up resistor so that we do not need an additional resistor for our circuit.

Now we enter the whole loop function which is of course processed over and over. The first 4 lines of the loop function are to read the current state of the buttons. If a button is pressed, the variable buttonState is LOW and we react in the following with the reaction depending on what button was pressed and then run the printScreen function which will be explained in the following section of this menu tutorial.
First we discuss the buttonStateLeft and buttonStateRight statement. We enter the first if query if the button is pressed and clear the screen to display the new screen without the old information. For the left button we decrease the pointer to show the screen before but when the pointer is already on the first screen (currentScreen == 0) we want to display the last screen to get a never ending rotation which you know from your mobile phone. For the right button we want to display the next screen. That is why we increase the variable currentScreen. If we reach the last screen we show the first screen also to get the functionality of a never ending loop in screens.
Now we want to discuss what happen if we push the button up or down. We first clear the screen too and then either increase or decrease the value of the current screen. The corresponding array which we defined earlier stores the changes values. For each screen we can therefore change the value.

I know that such tutorials can be a little bit dry but in the following video you see the button menu in action. You see me flipping through all screens and changing the values. Every time a value is changes is is also be stored and not overwritten from the initial values.

In this tutorial I showed you how to create a basic menu with 4 buttons, an LCD display and an Arduino Nano. Of course this are the basics but starting from here you can build you own menu and even more complex solutions. If you have problems building your menu or general questions to this tutorial, feel free to use the comment section below to ask your questions. I answer them as soon as possible.

8 thoughts on “Building a Menu with Buttons for your Microcontroller”